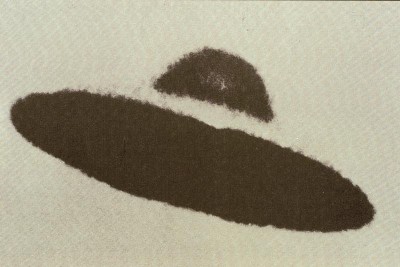 A close-up of a photograph taken by George Stuck of Passaic, New Jersey, as the UFO hovered about 200 feet above the ground. If there is such a thing as a typical flying saucer, his picture comes pretty close.
Fortean Picture Library

One night in 1974, from a Cessna Citation aircraft, one of America's most famous citizens saw a UFO.

There were four persons aboard the plane: pilot Bill Paynter, two security guards, and the governor of California, Ronald Reagan. As the airplane approached Bakersfield, California, the passengers called Paynter's attention to a strange object to their rear. "It appeared to be several hundred yards away," Paynter recalled. "It was a fairly steady light until it began to accelerate. Then it appeared to elongate. Then the light took off. It went up at a 45-degree angle-at a high rate of speed. Everyone on the plane was surprised. . . . The UFO went from a normal cruise speed to a fantastic speed instantly. If you give an airplane power, it will accelerate-but not like a hot rod, and that's what this was like."

A week later Reagan recounted the sighting to Norman C. Miller, then Washington bureau chief for the Wall Street Journal. Reagan told Miller, "We followed it for several minutes. It was a bright white light. We followed it to Bakersfield, and all of a sudden to our utter amazement it went straight up into the heavens." When Miller expressed some doubt, a "look of horror came over [Reagan]. It suddenly dawned on him . . . that he was talking to a reporter." Immediately afterward, according to Miller, Reagan "clammed up."

Reagan has not discussed the incident publicly since.­