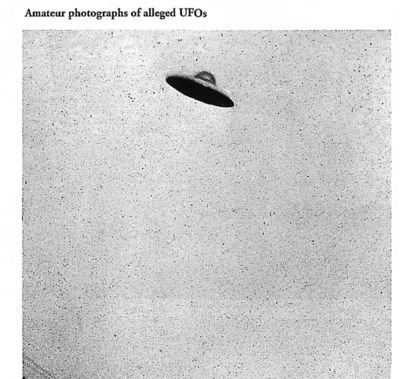 A purported UFO sighting in Passoria, New Jersey.
Photo courtesy of the CIA

Just about everyone in the United States has heard of the little town known as Roswell, New Mexico. Most people know there is some connection between Roswell and UFOs. But not many people know the details.

Why did the Roswell incident become such a huge deal? Because it's the most credible UFO sighting ever. First, the U.S. Army actually sent out a press release claiming that a flying disk had crashed in Roswell in July of 1947. The press release also claimed that the Army had recovered the disk. Later this press release was retracted, with the Army claiming it was a big mistake and exaggeration and the disk was actually a weather balloon. But by then the press was already all over the story, and the retraction only fanned the flames. You can see a typical newspaper article of the time here.

The second thing fueling the fire is the way the Army handled the evidence. The Army picked up all the debris from the Roswell crash site -- including pieces of debris that individuals from Roswell had collected -- and then all of this evidence vanished.

The third thing - the thing that took this incident into the stratosphere in terms of public interest -- is the idea that alien bodies were recovered from the crash site along with the debris.

In 1994 the Pentagon released a report that attempted to put the whole incident to rest [Source: CNN]. It seems to have had the opposite effect. The Pentagon again claims that the craft was actually an experimental weather balloon, and the bodies were really dummies used in the experiment.

So, what actually happened? The world may never know.

Even More on UFOs

If you're looking other in-depth information on UFOs and alien life, take a look at these articles:

How Spaceports Will Work
Drop the Doughnut: True Nature of Ravenous Supermassive Black Holes Revealed
Why Fruit Flies Were the First Animals in Space