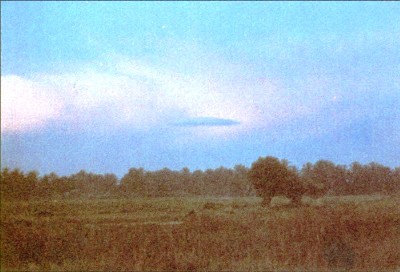 This lenticular cloud was photographed over Kepala Batas, Malaysia, in November 1984. Many UFO sightings can indeed be explained as natural occurrences.
Fortean Picture Library

Georgia Senator Richard Russell was a major figure in the U.S. Senate. As head of the Senate Armed Services Committee, he exerted enormous influence over the American defense establishment. When he spoke, the military listened. So when Russell reported what he had seen while traveling through the Soviet Union, no one laughed-and hardly anyone outside official circles knew of his remarkable experience until years later.

Just after 7 P.M. on October 4, 1955, while on a train in the Transcaucasia region, the senator happened to gaze out a window to the south. To his considerable astonishment his eyes focused on a large disc-shaped object slowly ascending as a flame shot from underneath it. The object then raced north across the tracks in front of the train. Russell scurried to alert his two companions, who looked out to see a second disc do what the first had just done. At that moment Soviet trainmen shut the curtains and ordered the American passengers not to look outside.

As soon as they arrived in Prague, Czechoslovakia, the three men went to the United States embassy and sat down with Lt. Col. Thomas S. Ryan, the air attaché. Russell's associate, Lt. Col. E. U. Hathaway, told Ryan that they were about to report something extremely important-"but something that we've been told by your people [the U.S. Air Force] doesn't exist."

Soon rumors about the senator's sighting reached America, but when a reporter for the Los Angeles Examiner tried to obtain details, Russell said only, "I have discussed this matter with the affected agencies and they are of the opinion that it is not wise to publicize this matter at this time." The report was not declassified until 1985. Interestingly, one of the "affected agencies" was not Project Blue Book, which never received the report. Apparently, the event was too sensitive for so lowly a project.