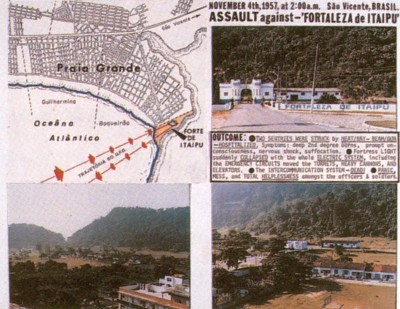 During the great sighting outbreak of early November 1957, a number of close encounters had a disturbing consequence: burns and related injuries to witnesses. One of the most dramatic occurrences took place at an army base at Itaipu along Brazil's Atlantic coast. At 2 A.M. on November 4 two guards saw a luminous orange disc coming in over the ocean at a low altitude and an alarming rate of speed. As it passed above the soldiers, the disc came to an instant stop.

The two witnesses suddenly felt a wave of heat and a horrifying sensation as if they had burst into flame. Their screams brought other soldiers stumbling out of their barracks just in time to see the UFO streak away. At that moment the fort's entire electrical system failed. Amid great secrecy the two men were rushed to a military hospital and treated during the next few weeks for first-and second-degree burns to ten percent of their bodies.

But there were other burn cases as well. In the afternoon of the same day as the Itaipu incident, the engines of several cars along a rural highway near Orogrande, New Mexico, ceased to function as an egg-shaped object maneuvered close by. A witness who stood particularly close to it contracted a "sunburn." In the early morning hours of November 6, outside Merom, Indiana, a hovering UFO, which bathed his farm in light, also seriously burned René Gilham's face. He ended up spending two days in the hospital.

More than three months after a green beam from a UFO struck Denise Bishop in, the burn on her hand could still be seen.
Fortean Picture Library

At around 1:30 A.M. on November 10 a Madison, Ohio, woman saw an acorn-shaped UFO hovering just behind her garage. She watched it for half an hour. In the days afterward she developed a body rash and vision problems that her doctor believed suggested radiation poisoning. Subsequent medical tests uncovered no apparent cause for her injuries.