Many consider the T-80 Main Battle Tank (MBT) to be no more than a variant of the T-72. Some even consider the "T-72" to be an export version and the T-80 to be the true T-72 MBT used by the Soviet armed forces.

The T-80 is a faster, more heavily armored tank than the T-72. The T-80 is powered by a gasoline turbine engine that gives the tank a ground speed in excess of 40 miles per hour. The tank is equipped with the Kobra missile system and can fire an antitank missile through its 125mm smoothbore gun.

An examination of the T-72's battle performance in Syrian hands during the Israeli invasion of Lebanon in 1982 led Soviet analysts to develop a program for up-armoring the T-64/T-72/T-80 series of MBTs.

Apparently, the laminate armor used in the hull was too vulnerable to the Merkava's 105mm main gun. Additional laminate armor that makes use of ceramic composites, as well as reactive armor, was noted on the T-80 and other Soviet tanks with Soviet forces in East Germany and Czechoslovakia.

In fact, by mid-1989 more than half the T-64/T-72/T-80 MBTs serving in Eastern Europe were clad in reactive armor. This development made obsolete as much as 80 percent of the one-man antitank weaponry in U.S./ NATO forces.

Reactive armor consists of steel boxes lined with explosives that are attached to the tank's hull and turret. When a high-explosive, antitank round strikes the reactive armor, the round's gas jet is disrupted by the explosives inside the box. Reactive armor is also said to be able to deflect solid-shot rounds in the same manner.

For more on T-80 Main Battle Tank equipment, continue to the next page.

Four distinct variations of T-80 Main Battle Tank equipment were observed. One version had fabric skirt armor over the tracks; another added side armor to cover the rear deck against overhead attack by aircraft or missiles.

A fourth tank version was unofficially known to NATO as the "Dolly Parton" for the shape of its thicker mantlet armor. This last model also has attaching points for reactive armor.

It is estimated that with the addition of all supplementary armor, the T-80's weight rose to 49.6 tons. In all other respects, the T-80 is very much like the T-72, so much so that the two are often confused even by expert observers.

The North Atlantic Treaty Organization estimated that one-third or more of all Soviet tanks in the Warsaw Pact in the late 1980s were of the T-64/T-72/T-80 MBT class and may have numbered as many as 32,000 at the end of 1987, although this estimate seems somewhat high.

If the T-80 -- indeed the entire T-64/T-72/ T-80 series -- has an Achilles' heel, many Western tank experts believe it is the autoloading system for the 120mm main gun. Use of an autoloader has two major effects.

The first is the mechanical complexity of the autoloading system itself. The T-80 autoloader has a capacity of 24 rounds, eight of which are carried in a magazine or carousel.

The semicombustible cases are contained in the upper ring of the carousel; the warheads are carried in the lower ring and can be selected by the gunner. Any malfunction or damage to the system would render the tank useless in combat.

The other effect to be considered is crew fatigue. Fighting and driving constitute only a small part of the crew's duties. Routine maintenance by far consumes the largest share of a crew's time.

With only three crew members available for maintenance, hours are longer and rest shorter. Tank commanders are often called away to commanders' conferences, increasing the work load on the remaining crew members.

See the next page to find specifications for the T-80 Main Battle Tank. 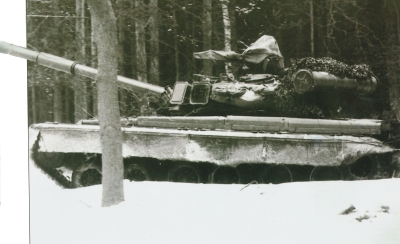 The T-80 Main Battle Tank was an improved model of the T-64/T-72. Note the snorkel tube behind the turret tunnel.
©2007 Publications International, Ltd.