by the Editors of Publications International, Ltd. Nov 18, 2007

The T-64 Main Battle Tank (MBT) was known as the T-72 to Western intelligence agencies for several years, even before the public advent of the T-62. Then in 1977 a new Soviet tank was identified, and the confusion began.

At first, it was thought the new tank was a variant of the older model. But then, as more information and clearer photographs were obtained, the differences became obvious.

This last element had not been seen on Soviet tanks since the World War II KV and JS series of heavy tanks. In addition, while both tanks had automatic loaders, the new model tank's auto-loading mechanism was of a different type. The old model tank was reclassified by NATO as the T-64; the new model was called the T-72.

The T-64's hull is divided into three compartments: driving in the front, fighting in the center, and the engine in the rear. The crew members are arranged in the T-64 in a slightly different manner than is usual in Soviet tanks.

The T-64 has a hydraulic-mechanical suspension system rather than the usual torsion bar suspension, and it is powered by a five-cylinder diesel engine. In addition to the differences between the T-72 and the T-64 noted above, the T-64 has a slightly smaller turret.

The infrared/white light searchlight is on the left side of the main gun rather than the right, as with the T-72, and two or three rectangular ammunition boxes are mounted on the left side of the turret. These boxes hold ammunition bells for the 12.7mm DShKM machine gun mounted ahead of the commander's cupola. The T-64 almost always carries its long snorkel tube fastened to a rack on the turret bustle when in the field.

The T-64A (NATO designation) or T-64 M1981/1 (Soviet designation) has a modified gun sight, smoke mortars on the front of the turret, and side skirt armor attaching to points along the fenders. The T-64B is equipped to fire the AT8 Songster antitank guided missile.

The main gun is a 125mm smoothbore. The gun is fed from a dual carousel auto-loader located on the hull floor that picks up both shell and powder charge. The gun is stabilized so the tank can shoot accurately while moving.

Rate of fire is five to eight rounds per minute, but there have been doubts cast on the reliability of the autoloading mechanism.

T-64 production came to an end in 1981. At the end of 1988, the T-64 was in service only with Soviet troops inside the Soviet Union and units assigned to Soviet forces in East Germany.

American intelligence sources think that the T-64 was not as satisfactory a design as the Soviets had wished. Evidence for this is the tank's low production, as well as its lack of distribution among Warsaw Pact forces or Soviet client states in the Middle East, Africa, or Latin America.

See the next page to find specifications for the T-64 Main Battle Tank. 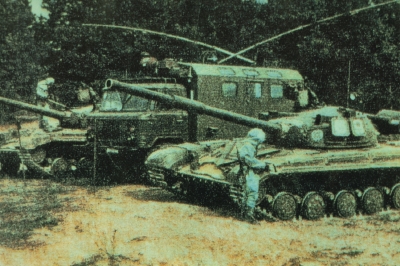 The T-64 Main Battle Tank was not a satisfactory design and was not provided to client forces of the USSR.
©2007 Publications International, Ltd.

How Mustard Gas Works
How Revolvers Work
Polikarpov I-16