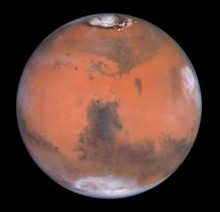 Mars has all of the elements needed to support life.
Photo courtesy NASA

Mars has long held a special fascination in the human imagination, as is witnessed by the scores of books and movies that have been produced about the planet in the last century alone. Each story creates its own unique image of what might exists on the red planet. What is it about Mars that makes it the subject of so many tales? While Venus is often referred to as Earth's sister planet, the conditions that exist on that fiery planet are far too uninhabitable. On the other hand, Mars is the next closest planet to us. And although it is a cold, dry planet today, it holds all of the elements that are needed for life to exist, including:

There are amazing similarities between the Martian atmosphere that exists today and the atmosphere that existed on Earth billions of years ago. When the Earth was first formed, no oxygen existed on our planet and it, too, looked like a desolate, unlivable planet. The atmosphere was made entirely of carbon dioxide and nitrogen. It wasn't until photosynthetic bacteria developed on Earth that enough oxygen was produced to allow for the development of animals. Similarly, the thin Mars atmosphere today is almost totally composed of carbon dioxide. Here is the composition of Mars' atmosphere:

In contrast, Earth's atmosphere consists of 78.1 percent nitrogen, 20.9 percent oxygen, 0.9 percent argon and 0.1 percent carbon dioxide and other gases. As you can see by this breakdown, any humans visiting Mars today would have to carry with them huge amounts of oxygen and nitrogen in order to survive. However, the similarity to the early Earth and modern Mars atmospheres has led some scientists to speculate the same process that turned the Earth's atmosphere from mostly carbon dioxide into breathable air could be repeated on Mars. To do so would thicken the atmosphere and create a greenhouse effect that would heat the planet and provide a suitable living environment for plants and animals.

Other worlds have been considered as possible candidates for terraforming, including Venus, Europa (a Jupiter moon), and Titan (a Saturn moon). However, Europa and Titan are too far from the sun, and Venus is too close (the average temperature on Venus is about 900 degrees Fahrenheit (482.22 Celsius)). Mars stands alone as the one planet in our solar system, not including Earth, that might be able to support life. In the next section, learn how scientists plan to transform the dry, cold landscape of Mars into warm, livable habitat.