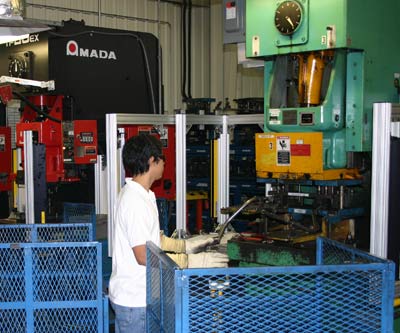 Six hours of pipe shaping goes into the manufacturing of ATVs.  See more images of the ATV factory.

If you've ever ridden an ATV, you probably have a pretty good sense of how one works. It's a lot like a smaller, more compact, simpler version of a car - it has an engine, wheels, shock absorbers and a steering system. But what does it take to build those parts into an ATV? We visited the Suzuki Manufacturing of America Corporation ATV factory in Rome, Georgia to find out.

An ATV's frame starts out as straight pieces of pipe. Hydraulic presses bend these pipes into the right shapes, while robotic plasma cutters cut them to the right length. It takes about six hours for one of these pieces to make its way into a finished ATV.

Pieces of pipe in various shapes and sizes eventually become the left, right, top and bottom of an ATV frame. The small pieces are known around the factory as "kiddie parts," and they combine to make a "mother part."

Robot arms cannot fit into very small spaces, so human welders perform some of the work as well. A special mask protects welders' eyes from flying sparks and from the extremely bright lights that welding produces. The window in the mask is light-sensitive and automatically darkens when a person starts welding.

Once the frames are fully assembled and all the welds are complete, an automated system cleans, paints and bakes them.

When the painting is finished, the parts are ready for pre-assembly. People assemble handlebars, as well as other components, before sending them to the assembly line.

In addition to frames, the Rome facility manufactures red and black fenders using an injection-molding machine. Some of the black fenders receive a camouflage coating at another facility.

The machine pulls small granules of resin through a hose, melts them and molds them into the proper shape. It uses 3,300 tons of pressure to mold the melted resin.

After the fenders come off the conveyor, people trim them and apply plastic to protect them while they cure. Stickers and logos are applied at another station, before the fenders go to the assembly line. Different fender shapes require different molds. These molds are extremely heavy - it takes a 25-ton crane to move them.

Once the frame and fenders are finished, they go to the assembly line. There, employees use pneumatic and battery-powered tools to mount the engine, shock absorbers, fenders and tires. When we visited the plant, an ATV-in-process spent 102 seconds at each station. In other words, a finished ATV came off the line every 102 seconds. As of July 2006, an ATV-in-process spends 89 seconds at each station. At this speed, the Rome plant can make about 310 ATVs per day, which is the equivalent of approximately 80,000 ATVs per year.

The last two stations on the assembly line are for inspection and packaging. A seesaw-like device moves each ATV off of the assembly-line pedestal and onto its wheels. Employees add gasoline to the tank and drive the ATV on a drum tester to make sure it runs properly. The drums under the wheels roll, so the vehicle can reach high speeds without actually moving. Employees then remove the gasoline from the tank. The factory uses between 200 and 300 gallons of gasoline a week for testing purposes.

Each finished ATV is placed on a wooden pallet. Employees lower a box over the ATV and use heavy-duty staple guns to secure and close the box. A forklift carries the packaged vehicle directly to a shipping truck - the Rome plant does not include storage space for completed ATVs.

More than 250 people work in the Rome factory. However, the entire manufacturing and assembly process, including the manufacturing of engines and other parts at other factories, takes more than 300 people. If you include the people who design the ATVs, plan the production process and perform other support roles, it takes more than 350 people to build one ATV.

For lots more information on ATVs and related topics, check out the links on the next page.

Special thanks to Alan Horne and the staff of the Suzuki Manufacturing of America Corporation for their assistance with this article.

How Do Pilots Make Up Time in the Air?
Ghost Train Station Is Symbolic Hope of Korean Reunification
Who Rides Passenger Trains in the U.S. These Days?