Why Hybrid? Why Diesel? 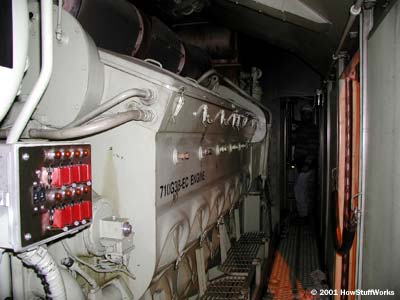 The 3,200-horsepower engine that drives the main generator

The main reason why diesel locomotives are hybrid is because this eliminates the need for a mechanical transmission, as found in cars. Let's start by understanding why cars have transmissions.

Your car needs a transmission because of the physics of the gasoline engine. First, any engine has a redline -- a maximum rpm (revolutions per minute) value above which the engine cannot go without exploding. Second, if you have read How Horsepower Works, then you know that engines have a narrow rpm range where horsepower and torque are at their maximum. For example, an engine might produce its maximum horsepower between 5,200 and 5,500 rpm. The transmission allows the gear ratio between the engine and the drive wheels to change as the car speeds up and slows down. You shift gears so that the engine can stay below the redline and near the rpm band of its best performance (maximum power).

A gearbox like this would be huge (it would have to handle 3,200 horsepower), complicated and inefficient. It would also have to provide power to four sets of wheels, which would add to the complexity.

By going with a hybrid setup, the main diesel engine can run at a constant speed, turning an electrical generator. The generator sends electrical power to a traction motor at each axle, which powers the wheels. The traction motors can produce adequate torque at any speed, from a full stop to 110 mph (177 kph), without needing to change gears.

Diesel engines are more efficient than gasoline engines. A huge locomotive like this uses an average of 1.5 gallons of diesel per mile (352 L per 100 km) when towing about five passenger cars. Locomotives towing hundreds of fully loaded freight cars use many times more fuel that this, so even a five or 10 percent decrease in efficiency would quickly add up to a significant increase in fuel costs.