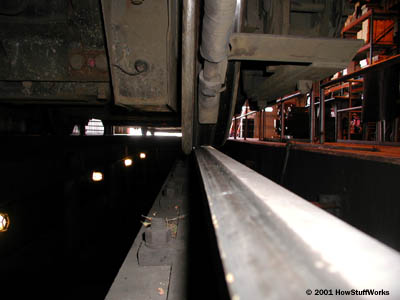 Ever wonder why trains have steel wheels, rather than tires like a car? It's to reduce rolling friction. When your car is driving on the freeway, something like 25 percent of the engine's power is being used to push the tires down the road. Tires bend and deform a lot as they roll, which uses a lot of energy.

The amount of energy used by the tires is proportional to the weight that is on them. Since a car is relatively light, this amount of energy is acceptable (you can buy low rolling-resistance tires for your car if you want to save a little gas).

Since a train weighs thousands of times more than a car, the rolling resistance is a huge factor in determining how much force it takes to pull the train. The steel wheels on the train ride on a tiny contact patch -- the contact area between each wheel and the track is about the size of a dime.

By using steel wheels on a steel track, the amount of deformation is minimized, which reduces the rolling resistance. In fact, a train is about the most efficient way to move heavy goods.

The downside of using steel wheels is that they don't have much traction. In the next section, we'll discuss the interesting solution to this problem.