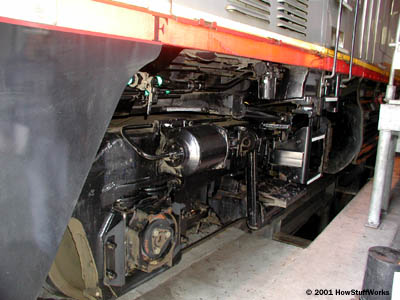 The trucks are the heaviest things on the train -- each one weighs 37,000 pounds (16,783 kg). The trucks do several jobs. They support the weight of the locomotive. They provide the propulsion, the suspensions and the braking. As you can imagine, they are tremendous structures.

The traction motors provide propulsion power to the wheels. There is one on each axle. Each motor drives a small gear, which meshes with a larger gear on the axle shaft. This provides the gear reduction that allows the motor to drive the train at speeds of up to 110 mph.

Two of the traction motors removed from a truck

The trucks also provide the suspension for the locomotive. The weight of the locomotive rests on a big, round bearing, which allows the trucks to pivot so the train can make a turn. Below the pivot is a huge leaf spring that rests on a platform. The platform is suspended by four, giant metal links, which connect to the truck assembly. These links allow the locomotive to swing from side to side.

The weight of the locomotive rests on the leaf springs, which compress when it passes over a bump. This isolates the body of the locomotive from the bump. The links allow the trucks to move from side to side with fluctuations in the track. The track is not perfectly straight, and at high speeds, the small variations in the track would make for a rough ride if the trucks could not swing laterally. The system also keeps the amount of weight on each rail relatively equal, reducing wear on the tracks and wheels.