­Yo­u see gears in just about everything that has spinning parts. Car engines and transmissions contain lots of gears. If you ever open up a VCR and look inside, you will see it is full of gears. Wind-up, grandfather and pendulum clocks contain plenty of gears, especially if they have bells or chimes. You probably have a power meter on the side of your house, and if it has a see-through cover you can see that it contains 10 or 15 gears. Gears are everywhere where there are engines and motors producing rotational motion.

Gears are generally used for one of four different reasons:

The fact that one gear is spinning twice as fast as the other is because of the ratio between the gears -- the gear ratio. In this figure, the diameter of the gear on the left is twice that of the gear on the right. The gear ratio is therefore 2:1 (pronounced "two to one"). If you watch the figure, you can see the ratio: Every time the larger gear goes around once, the smaller gear goes around twice. If both gears had the same diameter, they would rotate at the same speed but in opposite directions.

Understanding the Concept of Gear Ratio

The following figure shows how the circumference of a circle with a diameter of 1.27 inches is equal to a linear distance of 4 inches:

Let's say that you have another circle whose diameter is 0.635 inches (1.27 inches / 2), and you roll it in the same way as in this figure. You'll find that, because its diameter is half of the circle's in the figure, it has to complete two full rotations to cover the same 4-inch line. This explains why two gears, one half as big as the other, have a gear ratio of 2:1. The smaller gear has to spin twice to cover the same distance covered when the larger gear spins once.

Most gears that you see in real life have teeth. The teeth have three advantages:

To create large gear ratios, gears are often connected together in gear trains, as shown here:

The right-hand (purple) gear in the train is actually made in two parts, as shown above. A small gear and a larger gear are connected together, one on top of the other. Gear trains often consist of multiple gears in the train, as shown in the next two figures.

In this train, the smaller gears are one-fifth the size of the larger gears. That means that if you connect the purple gear to a motor spinning at 100 revolutions per minute (rpm), the green gear will turn at a rate of 500 rpm and the red gear will turn at a rate of 2,500 rpm. In the same way, you could attach a 2,500-rpm motor to the red gear to get 100 rpm on the purple gear. If you can see inside your power meter and it's of the older style with five mechanical dials, you will see that the five dials are connected to one another through a gear train like this, with the gears having a ratio of 10:1. Because the dials are directly connected to one another, they spin in opposite directions (you will see that the numbers are reversed on dials next to one another).

Other Uses for Gears 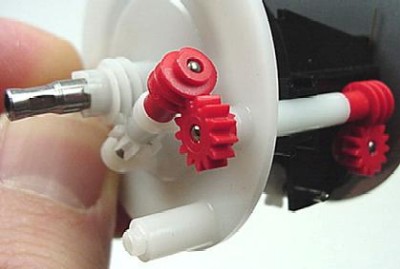 There are three worm gears visible in this odometer. See How Odometers Work for more information.

If you want to create a high gear ratio, nothing beats the worm gear. In a worm gear, a threaded shaft engages the teeth on a gear. Each time the shaft spins one revolution, the gear moves one tooth forward. If the gear has 40 teeth, you have a 40:1 gear ratio in a very small package. Here's one example from a windshield wiper.

A mechanical odometer is another place that uses a lot of worm gears:

There are many other ways to use gears. One specialized gear train is called a planetary gear train. Planetary gears solve the following problem. Let's say you want a gear ratio of 6:1 with the input turning in the same direction as the output. One way to create that ratio is with the following three-gear train:

In this train, the blue gear has six times the diameter of the yellow gear (giving a 6:1 ratio). The size of the red gear is not important because it is just there to reverse the direction of rotation so that the blue and yellow gears turn the same way. However, imagine that you want the axis of the output gear to be the same as that of the input gear. A common place where this same-axis capability is needed is in an electric screwdriver. In that case, you can use a planetary gear system, as shown here:

In this gear system, the yellow gear (the sun) engages all three red gears (the planets) simultaneously. All three are attached to a plate (the planet carrier), and they engage the inside of the blue gear (the ring) instead of the outside. Because there are three red gears instead of one, this gear train is extremely rugged. The output shaft is attached to the blue ring gear, and the planet carrier is held stationary -- this gives the same 6:1 gear ratio. You can see a picture of a two-stage planetary gear system on the electric screwdriver page, and a three-stage planetary gear system of the sprinkler page. You also find planetary gear systems inside automatic transmissions.

You could rearrange things again, and this time hold the sun gear stationary, take the output from the planet carrier and hook the input up to the ring gear. This would give you a 1.17:1 gear reduction. An automatic transmission uses planetary gearsets to create the different gear ratios, using clutches and brake bands to hold different parts of the gearset stationary and change the inputs and outputs.

Imagine the following situation: You have two red gears that you want to keep synchronized, but they are some distance apart. You can place a big gear between them if you want them to have the same direction of rotation:

Or you can use two equal-sized gears if you want them to have opposite directions of rotation:

However, in both of these cases the extra gears are likely to be heavy and you need to create axles for them. In these cases, the common solution is to use either a chain or a toothed belt, as shown here:

The advantages of chains and belts are light weight, the ability to separate the two gears by some distance, and the ability to connect many gears together on the same chain or belt. For example, in a car engine, the same toothed belt might engage the crankshaft, two camshafts and the alternator. If you had to use gears in place of the belt, it would be a lot harder.

For more information on gears and their applications, check out the links on the next page!

How Sanitary Are Airline Blankets and Pillows?
Windowless Airplanes: The Future of Flight?
Benevolent Drones: Is a Future Without Land Mines Just a Decade Away?