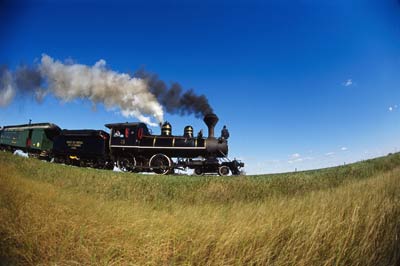 Steam engines were the foundation of the Industrial Revolution.
First Light/Getty Images

Steam engines were the first engine type to see widespread use. They were first invented by Thomas Newcomen in 1705, and James Watt (who we remember each time we talk about "60-watt light bulbs" and the such) made big improvements to steam engines in 1769.

Steam engines ­powered all early locomotives, steam boats and factories, and therefore acted as the foundation of the Industrial Revolution. In this article, we'll learn exactly how steam engines work!

The following diagram shows the major components of a piston steam engine. This sort of engine would be typical in a steam locomotive.

The engine shown is a double-acting steam engine because the valve allows high-pressure steam to act alternately on both faces of the piston. The following animation shows the engine in action.

­You can see that the slide valve is in charge of letting the high-pressure steam into either side of the cylinder. The control rod for the valve is usually hooked into a linkage attached to the cross-head, so that the motion of the cross-head slides the valve as well. (On a steam locomotive, this linkage also allows the engineer to put the train into reverse.)

You can see in this diagram that the exhaust steam simply vents out into the air. This fact explains two things about steam locomotives:

On a steam locomotive, the cross-head normally links to a drive rod, and from there to coupling rods that drive the locomotive's wheels. The arrangement often looks something like this:

In this diagram, the cross-head is connected to a drive rod that connects to one of three drive wheels for the train. The three wheels are connected via coupling rods so they turn in unison.

The high-pressure steam for a steam engine comes from a boiler. The boiler's job is to apply heat to water to create steam. There are two approaches: fire tube and water tube.

A fire-tube boiler was more common in the 1800s. It consists of a tank of water perforated with pipes. The hot gases from a coal or wood fire run through the pipes to heat the water in the tank, as shown here:

In a fire-tube boiler, the entire tank is under pressure, so if the tank bursts it creates a major explosion.

More common today are water-tube boilers, in which water runs through a rack of tubes that are positioned in the hot gases from the fire. The following simplified diagram shows you a typical layout for a water-tube boiler:

In a real boiler, things would be much more complicated because the goal of the boiler is to extract every possible bit of heat from the burning fuel to improve efficiency.

For more information on steam engines and all sorts of other engines, check out the links on the next page.