Parts of a Tower Crane 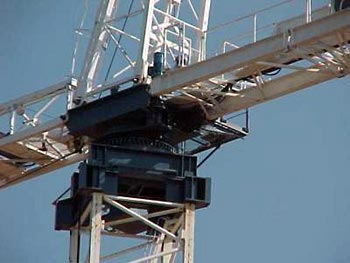 All tower cranes consist of the same basic parts:

On top of the slewing unit are three parts:

The machinery arm contains the motor that lifts the load, along with the control electronics that drive it and the cable drum, as shown here:

The motors that drive the slewing unit are located above the unit's large gear:

Now let's find out how much weight this equipment can handle.