We Finally Know Why Ancient Roman Concrete Outlasts Our Own

Why are millennia-old ancient Roman piers still standing strong as veritable concrete islands, while modern concrete structures built only decades ago crumble from an onslaught of wind and waves? The answer lies in an until-now undocumented Roman recipe.

Researchers at the University of Utah have discovered that as seawater filters through piers and breakwaters made of age-old Roman concrete, the structures actually become increasingly stronger because of the growth of interlocking minerals — including some minerals that are rare or expensive to cultivate in lab settings.

The new study, published in the journal American Mineralogist, found that as seawater percolates through the concrete in the piers and breakwaters, it dissolves parts of the volcanic ash that was used in construction. This allows new minerals like Al-tobermorite and phillipsite to grow from the leached fluids. These minerals, similar in shape to the crystals in volcanic rocks, then formed interlocking plates in gaps within the ancient concrete, making the concrete stronger over time.

This is pretty much the opposite of what happens to modern concrete structures, which are worn down by the elements and become increasingly cracked and brittle as pores and gaps are compromised by infiltrating seawater.

So why aren't we using Roman-style concrete? For one, we don't know the recipe. We may think we're at the height of human knowledge, but the ancients did possess precious knowledge that has been lost to time.

Although University of Utah geologist and lead study author Marie Jackson has pored through ancient Roman texts, she hasn't yet discovered a precise method for mixing the marine mortar. "The recipe was completely lost," said Jackson, who is working with geological engineers to recreate the right mix, in a press release.

Ancient Romans made concrete by mixing volcanic ash with lime and seawater to make a mortar, and then incorporating into that mortar chunks of volcanic rock. The concrete was used inland as well, as in structures like the Pantheon in Rome.
Stuart Black/robertharding/Getty Images

There's also a load-bearing issue. "Ancient" is the key word in these Roman structures, which took a long, long time to develop their strength from seawater. Young cement built using a Roman recipe would probably not have the compressive strength to handle modern use — at least not initially.

But that doesn't mean concocting a concrete mix using Roman engineering savvy wouldn't be useful. The concrete could potentially be used to replace other corrodible building materials — like steel and modern concrete — in newly constructed tidal lagoons, for instance, and other sea or sea-adjacent structures.

Now That's Interesting
What's the difference between concrete and cement? Concrete is a mixture of cement — a mineral powder — and water that is formed into a paste, then mixed with sand and rocks.

Why Just 5% of Americans Account for 50% of U.S. Health Care Spending 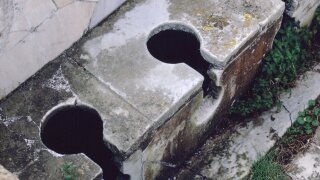 10 Times Humanity Found the Answer (and Then Forgot) 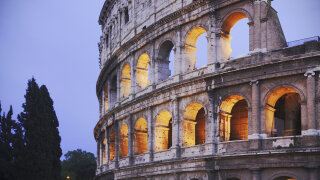 Did Romans really purge their bellies in vomitoria?