Why are drone pilots leaving the military? 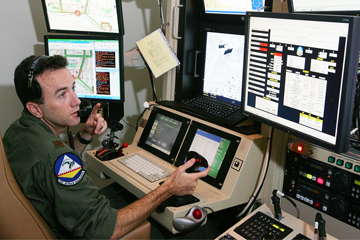 Managing a career can be a tricky thing. That's particularly true for folks who've experienced a national, regional or global economic recession and survived to tell the tale. For many of us, it's hard enough to find and keep a decent job -- any decent job -- let alone find one that offers bonuses like good benefits, interesting work, a collegial atmosphere and personal fulfillment. Then, of course, there's the old saw about the devil you know. Sure, that opening in corporate accounting may look like a fantastic opportunity, but you probably won't find out for sure until it's too late to turn back.

Perhaps that's why many people find their callings -- or, at least, a calling -- in government and military work. You probably won't get rich, but you will get a steady paycheck, lots of job security and the opportunity to serve your country. For tech types, you may even get to play with some fancy toys. As anyone who's ever served in the armed services already knows, however, it can also be incredibly stressful work. It's that mental wear and tear that appears to be driving U.S. Air Force drone pilots out of the military life in droves.

Nearly a quarter of the Air Force pilots trained and authorized to fly drones quit their jobs each year, according to Mother Jones. Military officials site fatigue, stress, war weariness and a perceived lack of respect from superiors and fellow soldiers as the culprits behind the turnover. They also say that the dearth of trained drone pilots leaves military members and assets on the ground in foreign lands at risk [sources: Chatterjee, Majumdar].

The 1,000 or so drone pilots currently working for the Air Force fly two types of missions. Most are surveillance and intelligence gathering treks in which drones use cameras to collect photos and information about areas of interest and watch over American military forces on the ground. The other type of drone mission -- less frequent, but more publicized -- is the combat variety in which artillery-equipped drones drop missiles or bombs on targets below. As one may expect, it's the second brand of drone work that's doing a number on many of the pilots [sources: Chatterjee, Majumdar].

Although drone pilots operate in a sort of video game atmosphere, controlling their flying machines and striking foreign targets from the comfort of a military base in the States, they are well aware of the very real damage that their work inflicts. Unlike counterparts who fly traditional aircrafts in war zones -- many of whom swoop in, strike their targets and get out before the smoke clears -- drone pilots often monitor a target for hours and even days before they fire a shot. They also stick around to make sure the job is done. That's the kind of intimacy that many say makes the job all the more difficult [sources: Chatterjee, Majumdar].

Even for pilots flying pure surveillance missions, there's wear and tear that comes with the job. Pilots work up to 12-14 hours a day and six days a week, piling up as much as 1,800 hours behind the controls of a drone each year. That's about six times the 300-hour annual cap for other Air Force pilots. As if that weren't enough, many pilots claim they're viewed as second-class soldiers in the eyes of their colleagues, especially those who don't get to spend their days in a cozy control center and go home to their families at night [sources: Chatterjee, Brannen].

The high number of dropouts leaves the U.S. military with more drones than it has pilots to operate them. While the Air Force has responded by offering significant seniority-based bonuses, it appears that many drone pilots don't stick around long enough to take advantage of them [sources: Chatterjee, Brannen].