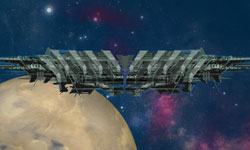 Whether enjoying a Caribbean cruise or enduring a red-eye flight to Boston, you'd probably prefer a thoroughly sober captain -- not one tripping inside a massive vat of drugs.

At least that's the norm in our universe -- not so in the pages of Frank Herbert's "Dune" saga. Yes, the next spacecraft on our list is one of the Guild's heighliners, ships massive enough to carry entire planetary populations, gargantuan payloads and whole armies across the known universe.

Who can you trust to safely pilot such a craft? Not a mere human, that's for sure -- and certainly not a machine. Clearly, you'll want to pass the wheel to a secret society of navigators who imbibe ghastly quantities of the drug Melange.

Also known by its street name "the spice," Melange induces prescience (insight into future events) in the user. This effect allows the navigators to dodge safely the many disasters that await a heighliner on an interstellar jaunt. Heavily atrophied and mutated by their addiction, these navigators float in thick clouds of the stuff, enclosed within special chambers.

Think of it as the ultimate safety feature in a vehicle that also allows us to fold time and space.