The Spaceship of the Imagination 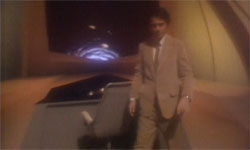 Sagan takes the captain's chair aboard the Spaceship of the Imagination.
Image courtesy the Science Channel

Benevolent supercomputers, organic ships made from alien creatures -- it all feels a bit dishonest, doesn't it? Humanity's future in space should be born out of our fascination with the universe, not out of a lazy desire to cruise the stars.

Behold the bridge of the Spaceship of the Imagination, cosmologist Carl Sagan's own fictional starship from the 1980 television series "Cosmos: A Personal Voyage." Outside, the vessel resembled a glowing dandelion seed. Inside, it was all glowing new-age Star Trekery, cathedral ceilings and the ethereal vibes of electronic composer Vangelis.

Fueled by curiosity, Sagan's flagship traverses the far-flung galaxies of the known universe, leveling the twin photon torpedoes of science and physics against even the darkest of cosmic mysteries. The man himself is no longer around to pilot it for us, but his legacy inspires us still.