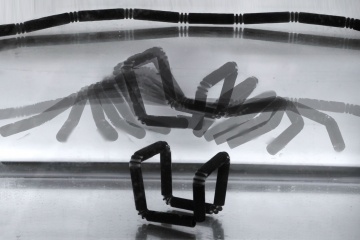 Imagine that the machines and structures we use every day, from particleboard bookshelves to apartment blocks, could assemble themselves. No more Ikea hex wrenches, no more cranes, just 3-D-printed materials that "know" how to fold, curl and stiffen, like plants growing in a time-lapse video.

In other words, what if we could print objects that were four-dimensional?

OK, sure, technically everything is four-dimensional — actually, 10-or-more-dimensional, according to physicists — but we mainly think of the built world in terms of length, width and height. The fourth dimension, time, we see as the enemy, the effects of which we do our best to resist (experts remain split as to whether the fifth dimension is "The Twilight Zone" or the band that sang "The Age of Aquarius").

And so we build walls and pipes as strong as we can — and keep repairing them as they age — because construction takes time, money and effort, and we don't want to do it over and over again. But what if time weren't the enemy? Suppose a structure could unfold itself, like origami. Imagine if its walls could flex or stiffen in response to shifting loads, or if a buried pipe could change shape to accommodate varying water flows — or to pump water via peristalsis, like your digestive system. Through 4-D printing, nothing is set in stone unless you want it to be.

If researchers and manufacturers can get it to work, 4-D printing could change our entire idea of manufacturing. Companies could print shelters, machines and tools, then flat-pack them and ship them where needed — disaster areas, perhaps, or prepare them for hostile environments like space or the ocean floor. There, environmental conditions harmful to humans might actually power the object's changes in shape and properties — not just once, but repeatedly.

At the heart of it all lie the basic physics, chemistry and geometry behind the most mundane natural processes. Consider how your hair changes shape as a storm rolls in, a simple matter of airborne water causing keratin proteins to form an unusually high proportion of hydrogen bonds, which cause them fold back instead of stretch out [source: Stromberg]. Or think of how a flat inflatable chair assumes a predictable shape as it takes in air because its sections have different properties.

Four-dimensional devices do not require humans to build them, nor are they robots that require microchips, servos and armatures to work. Their sole "programming" involves the geometry, physics and chemistry embedded in their structures.