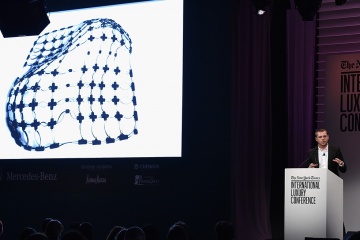 Along with his team, Skylar Tibbits, director of MIT's Self-Assembly Lab, has been leading the innovation.
Larry Busacca/Getty Images for The New York Times International Luxury Conference

MIT researchers are not the only ones working on 4-D printing, but the school's Self-Assembly Lab is the one that made the earliest splash, largely thanks to the TED talks of its director, architect Skylar Tibbits.

The lab's researchers first entered the world of self-assembly by creating simple, large-scale, self-building robots. When they found the labor and expense unworkable, they turned to making shapes and materials with logic built into them.

In 2010, they created Logic Matter, a set of interlocking shapes that could solve computational problems using only their geometry.

Reduced to its most basic, a computer operates using electronic gates that combine 1s and 0s and return a true or false answer. These gates use Boolean algebra, which asks questions like "are both inputs 1s?" or "is either input a 1?" The Tibbits lab asked the same questions, but using complex polyhedrons instead of the usual electrical on/off states representing 1s and 0s. Input involved clicking shapes into place. This created a new configuration that would allow the next shape — the output — to attach only in an upward (true) or downward (false) orientation, providing the answer.

Logic Matter did not rise to the level of self-assembly — the pieces required human hands to snap them together — but it did constitute an important first step in that direction by showing that matter could have instructions built into it [source: Tibbits]. Over the years that followed, researchers from the Self-Assembly Lab moved increasingly to items more in keeping with their name: geometric shapes that would combine if rolled or shaken in a container, chains that assumed particular shapes when shaken, and so on.

This marked the next important step: combining a built-in geometric tendency with an input of energy (or some other environmental factor) to kick it into gear.

But what is this geometric tendency? Well, if you've ever tried to make something out of cardboard (or wood, or metal), you know that it folds more readily if you score it first. Scoring, then, is a kind of programming, a way to make the material more likely to behave the way you want it to. Now instead of cardboard, imagine a combination of materials, some of which can absorb water and grow while others remain stiff. Toss it in water, and watch its shape change. Get clever enough with your foldings and scorings and, before you know it, you have something truly special.

But first, you need a lot of precise control over the materials you use and the pattern in which your machinery lays them down. And this approach will work better on smaller scales, where energy inputs and material differences can have a greater effect. Multi-material 3-D printing helped provide the control researchers needed, but they also needed the right materials.