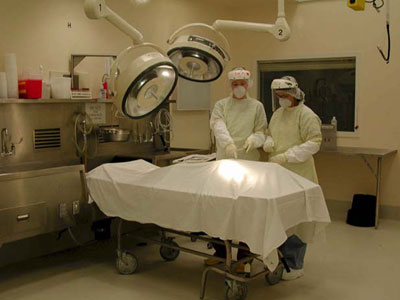 There are four legally defined manners of death:

After careful examination of all the evidence at hand, the forensic pathologist acting as a medical examiner or coroner (more on the distinction later) will assign a cause of death as one of these four manners.

For example, if the autopsy reveals a natural disease process such as leukemia or cancer, then the death would be considered natural.

The answers are not always that clear. The pathologist must consider all of the information. Severe head injuries that result in death with no evidence of assault could be hard to explain. But when that evidence is added to the police report that states the body was found next to an ice-covered, fallen ladder, the manner of death is an accident.

It would be easy to assume a gunshot wound is the result of a homicide. But an autopsy could reveal that the wound patterns, angle of bullet entry and gun powder residue indicate that the gun was fired while being held by the victim. The wounds are self-inflicted, so that would be ruled a suicide.

In the next section, we'll look at the difference between a coroner and a medical examiner.