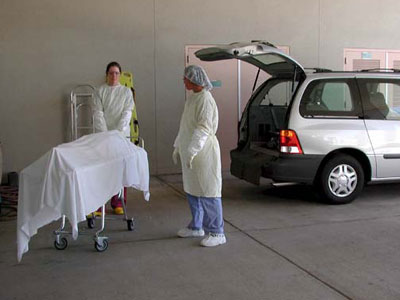 The body is received at a medical examiner's office or hospital in a body bag or evidence sheet. If the autopsy is not performed immediately, the body will be refrigerated in the morgue until the examination.

A brand new body bag is used for each body. This is to ensure that only evidence from that body is contained within the bag. Body bags are closed and sealed to prevent any contamination or evidence loss during transportation [source: Saukko and Knight].

Evidence sheets are an alternate way to transport the body. An evidence sheet is a sterile sheet that the body is covered in when it is moved. Just like the body bags, investigators use brand new sheets for every corpse [source: Saukko and Knight].

The body is moved in the bag or sheet to the examination suite. The person responsible for handling the body is often called a diener. The diener is a morgue attendant who is responsible for moving and cleaning the body and, in some cases, assisting in the autopsy. The diener will also clean the exam suite after the autopsy is over. This job may vary from facility to facility [source: Waters].

Evidence is collected off of the external surfaces of the body. Hair samples, fingernails, gunshot residue (if present), fibers, paint chips or any other foreign objects found on the surface of the body are collected and noted.

If it is a homicide investigation, the hands of the deceased will be placed in bags at the scene. The medical examiner will open the bags and take residue and fingernail samples. Then the bags are removed, folded and submitted with the samples as part of the evidence.

In some cases, a special UV radiation is used to enhance secretions on the skin or clothes. The radiation causes the secretions to fluoresce so that they may be collected for samples [source: Kiesel, Saukko and Knight].

Once the evidence is all collected, the body is removed from the bag or sheet and undressed, and the wounds are examined. This is done before the body is cleaned up.

After the body is cleaned, the body is weighed and measured before being placed on the autopsy table for reexamination. The autopsy table is typically a slanted, aluminum table with raised edges that has several faucets and drains used to wash away collecting blood during the internal investigation. The types of tables used vary from facility to facility. The body is placed face up on the table, and a body block is placed under the patient's back. A body block is a rubber or plastic "brick" that causes the corpse's chest to protrude forward while the arms and neck fall back. This position makes the chest easier to cut open [source: Saukko and Knight, Johns Hopkins].

At this point, a general description of the body is made. All identifying features are noted including:

One body is weighed while the other is fingerprinted before the external examination.
Photo courtesy Sacramento County Coroner's Office

These features are noted on a handheld voice recorder or a standard exam form. In addition to all normal features, any external abnormalities are noted in these reports.

"We usually separate out into different categories our general description from our evidence of trauma, from our evidence of medical intervention, " Kiesel explains. "We'll get a blood sample ... we begin to collect some specimens for toxicology [the study of the effects of chemicals on the human body] ... then we'll open the body."

In the next sections, we'll talk about the internal examination.