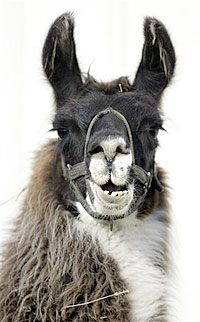 As most of us know, llamas are our friends. They're soft, good-natured and amusing to view, and their name has the distinction of being one of only 12 words in the English language starting with a double-L (according Webster's Third New International Dictionary, Unabridged). But little did we know that these fuzzy, camel-like creatures might save us all should the End come in the form of a biological attack.

For many years, scientists have been developing devices called biosensors that can detect the first signs of biological warfare. These sensors are made up of antibodies, usually cloned human antibodies called Immunoglobin G (IgG). IgGs are one of the tools that the human immune system uses to detect, target and destroy viruses like cholera and smallpox, which have been cited as potential biological weapons. Specific antibodies bind only to specific virus antigens, so different types of sensors detect different types of diseases (see How Your Immune System Works to learn more). The idea is that when these antibody-based sensors start reacting -- that is, binding to particles in the air -- we instantly know that a biological threat is present and which biological threat it is.

The problem with antibodies like IgG is that they're delicate. Antibodies are protein chains, and IgG is made up of both heavy and light chains. This means they are complex in structure, with complex binding methods, which makes them expensive and time-consuming to produce. The light protein chains in particular make them very susceptible to environmental changes. IgG has a short shelf life, requires refrigeration, and if it's exposed to high temperatures -- anything above about 150 F (~65 C) -- it completely breaks down, making the sensor useless. Enter the llama antibody.

Llamas, camels and sharks all produce an antibody that is incredibly sturdy. It has no light protein chains, only heavy ones, making it not only hardy but also simple, with a tiny binding site (about one-tenth the size of the binding site on a human antibody). Scientists can create these single-domain antibodies (sdAbs) quickly, as researchers have done at the U.S. Naval Research Laboratory in Washington, DC. Using small amounts of blood drawn from llamas, scientists have built a library of more than a billion sdAbs engineered to bind to different antigens. Because the binding site is so small, they're far easier and less expensive to engineer than other kinds of antibodies. And their simplicity makes them strong: They have a much longer shelf life than IgG, require no refrigeration and remain perfectly intact at temperatures up to 200 F (~90 C).

Using these tough, simple antibodies, scientists could develop a library of sensors to detect every bio-weapon imaginable -- and then very quickly develop antibodies that bind to new threats as they come up. Placed in portable containers, soldiers could carry these llama-based biosensors into the field to detect a bio-threat as soon as it becomes viable. Temperature and time constraints would no longer prevent the extensive use of biosensors in rugged terrain.

For more information on llamas, biological warfare and related topics, check out the following links: