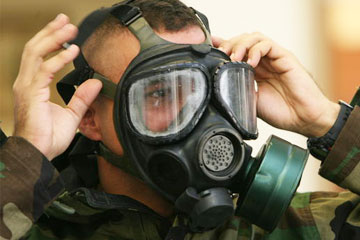 With spores mailed inside envelopes, the 2001 anthrax attacks marked the first bioterrorist attacks in the United States. The spores killed five people, four of whom were not the intended targets. After considering Al Qaeda, draining ponds in search of evidence, and pursuing the wrong person, the FBI traced the letters to a domestic source -- a scientist working in biodefense. He was one of the FBI's own advisors on anthrax.

Besides proving deadly, the 2001 anthrax incident caused considerable disruption. Mail was stopped in several cities, and it cost more than $1 billion to clean up the spores [source: Lipton]. And all of this was caused by just one man. The prospect of a larger attack is beyond frightening. Terrorists can hide biological weapons in pharmaceutical production lines and breweries. The biggest eyes we have for surveillance, like spy satellites, can't inspect those very well.

So where does the U.S. stand if it's attacked again? In 2005, the presidential commission on intelligence released a report saying that while the United States was building a reasonable defense of vaccines and other measures on the ground, it was rather clueless on which countries had what biological agents [source: Lipton]. In 2009, the Department of Homeland Security predicted that the United States would see another biological attack in the next five years [source: AP].

Chemical weapons have the same potential for killing thousands of people in a city attack -- and unfortunately, a long history of doing so. Thankfully, much of the world has at least pledged to disarm itself of chemical weapons. Under the Chemical Weapons Conventions, states representing 98 percent of the world's population and the same percentage of the chemical industry are supposed to be rid of chemical weapons by 2012 [source: OPCW]. But there are enough routes around the treaties. States like North Korea didn't sign them. And signatories may have undeclared weapons. Before they are actually destroyed, weapons marked for disposal could also be stolen or sold. Still, as of December 2008, more than 40 percent of the world's declared chemical stockpile, led by the stockpilers Russia and the United States, had been destroyed [sources: Cohen, Chyba].

For all of these reasons, it's good to know what threats exist. This article will explain how chemical and biological weapons really work, how they might be deployed and what the actual threats are.