How can you train honeybees to sniff for bombs? 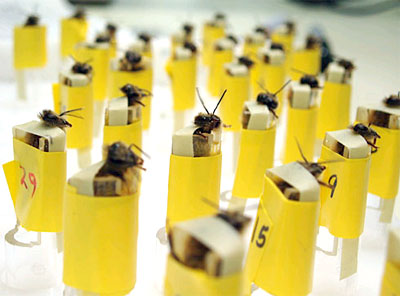 Police and military personnel have been using dogs to sniff out explosives for decades. According to scientists from the Defense Advanced Research Laboratory (DARPA), who have been working with honeybees since 1999, bees can actually challenge dogs when it comes to sense of smell. Those same, buzzing insects that seek out molecular hints of the pollen they use to make honey can just as easily detect other minute particles in the air, including traces of materials used to make bombs. So how do you train them to respond to TNT the way they respond to pollen?

The same way you train any animal to do almost anything: by associating a particular stimulus with a reward. With Pavlov's dog, associating the sound of a bell with the smell of food caused the dog to drool when the bell rang. With honeybees at Los Alamos National Laboratory, where researchers are conducting the most recent military studies with bees, associating the smell of bomb ingredients with sugar water causes the bees to extend their proboscis, as if they were about to extract sweet nectar from a flower, when they smell explosives. And it doesn't take very long. Bees who are going to get the association get it quickly, after only a few exposures to vaporized explosives ingredients followed by the sugar water.

With the bees strapped into small tubes, scientists involved in the Stealthy Insect Sensor Project release the smell of chemical components used to make explosives like dynamite, C-4 and liquid bombs. Expecting the sugar water to follow, each trained bee extends its proboscis, which starts waving in the air, searching for nectar. It's this obvious response that makes this particular training method so useful. By containing the bees in an enclosed structure, researchers can use monitoring equipment to alert to the waving of the proboscises. In this case, a digital camera combined with pattern-recognition software can pick up the waving and indicate the presence of explosives in the vicinity. The portable structure makes it ideal for testing in airports, subway stations and at roadside checkpoints in war zones like Iraq. The bees can detect the target chemicals in the air in concentrations as low as a few parts per trillion.

Years earlier, a DARPA-funded project trained honeybees to be attracted to explosives instead of pollen using the same sugar-water-reward process. This study trained them to swarm around the location of the scent of 2,4-dinitrotoluene, a chemical residue left by several different types of bombs. The uncontained bees worked very well in small, outdoor areas, where security guards could easily see where they were swarming, but were harder to track when they were used to detect explosives in large, uncontained spaces. So researchers fitted the bees with tiny radio transmitters to find them -- and the bomb -- when they swarmed. Uncontained, trained bees wouldn't be very welcome at airport security checkpoints, but they could potentially work wonders in a war zone.

Researchers at Los Alamos are also training bees to sniff out drugs like methamphetamine and cocaine. 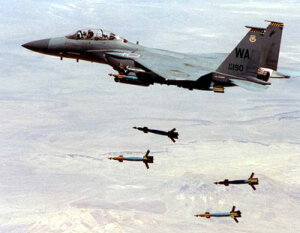