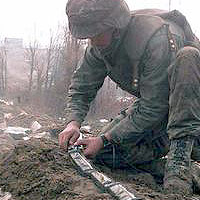 Twenty years ago, most people didn't have any idea what C-4 was. Recently, it has become an all-too-familiar term, popping up in newspapers and on television all the time. In October 2000, terrorists used C-4 to attack the U.S.S. Cole, killing 17 sailors. In 1996, terrorists used C-4 to blow up the Khobar Towers U.S. military housing complex in Saudi Arabia. In December 2001, a man smuggled similar material, hidden in his shoes, onto a commercial airliner. C-4 has also been used in many of the Palestinian suicide bombings in Israel and the Israeli-occupied territories.

In this article, we'll find out what this powerful material is and see how it can wreak such destruction. 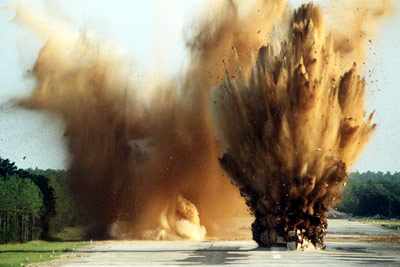 The fundamental concept behind explosives is very simple. At the most basic level, an explosive is just something that burns or decomposes very quickly, producing a lot of heat and gas in a short amount of time.

­In the chemical reaction, compounds break down to form various gases. The reactants (the original chemical compounds) have a lot of energy stored up as chemical bonds between different atoms. When the compound molecules break apart, the products (the resulting gases) may use some of this energy to form new bonds, but not all of it. Most of the "leftover" energy takes the form of extreme heat.

The concentrated gases are under very high pressure, so they expand rapidly. The heat speeds up the individual gas particles, boosting the pressure even higher. In a high explosive, the gas pressure is strong enough to destroy structures and injure and kill people. If the gas expands faster than the speed of sound, it generates a powerful shock wave. The pressure can also push pieces of solid material outward at great speed, causing them to hit people or structures with a lot of force.

C-4 is a high explosive designed for military use. In the next section, we'll find out what sets it apart from other explosives. 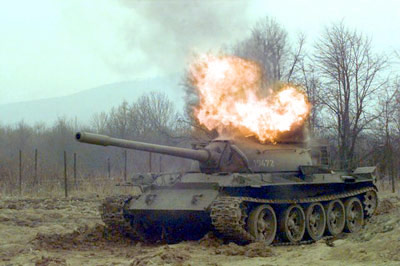 The explosive material in C-4 is cyclotrimethylene-trinitramine (C3H6N6O6), commonly called RDX (which stands for "royal demolition explosive" or "research development explosive"). The additive material is made up of polyisobutylene, the binder, and di(2-ethylhexyl) sebacate, the plasticizer (the element that makes the material malleable). It also contains a small amount of motor oil and some 2, 3-dimethyl-2, 3-dinitrobutane (DMDNB), which functions as a chemical marker for security forces.

To make C-4 blocks, explosives manufacturers take RDX in powder form and mix it with water to form a slurry. They then add the binder material, dissolved in a solvent, and mix the materials with an agitator. They remove the solvent through distillation, and remove the water through drying and filtering. The result is a relatively stable, solid explosive with a consistency similar to modelling clay.

Just as with other explosives, you need to apply some energy to C-4 to kick off the chemical reaction. Because of the stabilizer elements, it takes a considerable shock to set off this reaction; lighting the C-4 with a match will just make it burn slowly, like a piece of wood (in Vietnam, soldiers actually burned C-4 as an improvised cooking fire). Even shooting the explosive with a rifle won't trigger the reaction. Only a detonator, or blasting cap will do the job properly.

When the chemical reaction begins, the C-4 decomposes to release a variety of gases (notably, nitrogen and carbon oxides). The gases initially expand at about 26,400 feet per second (8,050 meters per second), applying a huge amount of force to everything in the surrounding area. At this expansion rate, it is totally impossible to outrun the explosion like they do in dozens of action movies. To the observer, the explosion is nearly instantaneous -- one second, everything's normal, and the next it's totally destroyed.

The explosion actually has two phases. The initial expansion inflicts most of the damage. It also creates a very low-pressure area around the explosion's origin -- the gases are moving outward so rapidly that they suck most of the gas out from the "middle" of the explosion. After the outward blast, gases rush back in to the partial vacuum, creating a second, less-destructive inward energy wave.

A small amount of C-4 packs a pretty big punch. Less than a pound of C-4 could potentially kill several people, and several military issue M112 blocks of C-4, weighing about 1.25 pounds (half a kilogram) each, could potentially demolish a truck. Demolition experts typically use a good amount of C-4 in order to do a job properly. To take out one 8-inch (20.3-centimeter) square steel beam, for example, they would probably use 8 to 10 pounds (3.6 to 4.5 kilograms) of C-4.

People apply C-4's explosive power toward all kinds of destruction. One common application is military demolition -- soldiers pack it into cracks and crevices to blow up heavy walls. It has also been widely used as an anti-personnel weapon, in battle and in terrorist attacks. In Vietnam, for example, soldiers used a number of C-4-based bombs and grenades. One notable weapon, the claymore mine, consisted of a C-4 block with several embedded ball bearings. When the C-4 was detonated, the ball bearings became deadly flying shrapnel (this sort of weapon was also featured in the movie Swordfish).

Unfortunately, C-4 will keep making headlines for years to come. Because of its stability and sheer destructive power, C-4 has attracted the attention of terrorists and guerilla fighters all over the world. A small amount of C-4 can do a lot of damage, and it's fairly easy to smuggle the explosive past light security forces. The U.S. military is the primary manufacturer of C-4, and it tightly guards its supply, but there are a number of other sources for similar explosive material (including Iran, which has a history of conflict with the United States). As long as it is readily accessible, C-4 will continue to be a primary weapon in the terrorist arsenal.

For more information on C-4 and other explosives, check out the links on the next page.

How do they deice airplanes?
How IARPA Works
Boeing B-52 Stratofortress