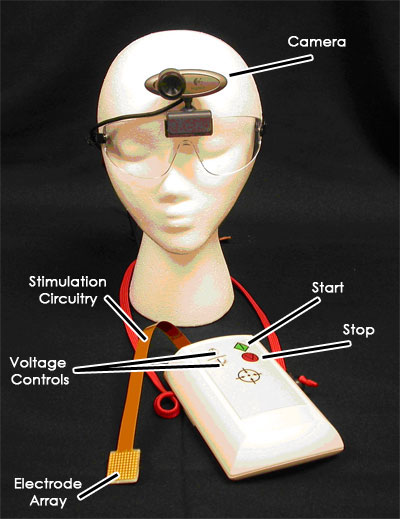 Test results for the BrainPort vision device are no less encouraging, although Wicab has not yet performed formal clinical trials with the setup. According to the University of Washington Department of Ophthalmology, 100 million people in the United States alone suffer from visual impairment. This might be age-related, including cataracts, glaucoma and macular degeneration, from diseases like trachoma, diabetes or HIV, or the result of eye trauma from an accident. BrainPort could provide vision-impaired people with limited forms of sight.

To produce tactile vision, BrainPort uses a camera to capture visual data. The optical information -- light that would normally hit the retina -- that the camera picks up is in digital form, and it uses radio signals to send the ones and zeroes to the CPU for encoding. Each set of pixels in the camera's light sensor corresponds to an electrode in the array. The CPU runs a program that turns the camera's electrical information into a spatially encoded signal. The encoded signal represents differences in pixel data as differences in pulse characteristics such as frequency, amplitude and duration. Multidimensional image information takes the form of variances in pulse current or voltage, pulse duration, intervals between pulses and the number of pulses in a burst, among other parameters. According to U.S. Patent 6,430,450, licensed to Wicab for the BrainPort application:

To the extent that a trained user may simultaneously distinguish between multiple of these characteristics of amplitude, width and frequency, the pulses may convey multidimensional information in much the same way that the eye perceives color from the independent stimulation of different color receptors.

The electrode array receives the resulting signal via the stimulation circuitry and applies it to the tongue. The brain eventually learns to interpret and use the information coming from the tongue as if it were coming from the eyes.

After training in laboratory tests, blind subjects were able to perceive visual traits like looming, depth, perspective, size and shape. The subjects could still feel the pulses on their tongue, but they could also perceive images generated from those pulses by their brain. The subjects perceived the objects as "out there" in front of them, separate from their own bodies. They could perceive and identify letters of the alphabet. In one case, when blind mountain climber Erik Weihenmayer was testing out the device, he was able to locate his wife in a forest. One of the most common questions at this point is, "Are they really seeing?" That all depends on how you define vision. If seeing means you can identify the letter "T" somewhere outside yourself, sense when that "T" is getting larger, smaller, changing orientation or moving farther away from your own body, then they're really seeing. One study that conducted PET brain scans of congenitally blind people while they were using the BrainPort vision device found that after several sessions with BrainPort, the vision centers of the subjects' brains lit up when visual information was sent to the brain through the tongue. If "seeing" means there's activity in the vision center of the cerebral cortex, then the blind subjects are really seeing.