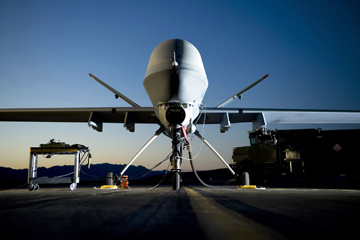 The MQ-9 Reaper drone can be piloted remotely or can fly autonomously.
Stocktrek Images/Getty Images

Drones are everywhere. That is, they will be just about everywhere if regulators ever loosen their grip on how unmanned aerial vehicles (UAVs) are used. With the advent of smart and cheap flying machines comes the increasingly endless array of ways in which they might be put to work. Whether photographing music festivals or delivering Amazon packages to your front door, or aiding in search and rescue missions and collecting data from the heart of a tropical storm, drones can gett into difficult-to-reach places and cover a lot of ground, making them a useful tool in all kinds of settings. That includes on the battlefield, where flying machines are probably best known for their role in surveillance and attack missions.

The U.S. Air Force currently operates about 65 combat air patrols at any given time. Most of those machines are working overseas, strapped with Hellfire missiles and cameras that can provide real-time feeds to pilots back in the States. That's only a tiny fraction of the U.S. military's air fleet, but the portion is growing along with the size and scope of the duties that they perform. That includes the plane-to-plane combat way up in the sky that most of us civilians only know about from watching "Top Gun." Some military experts see a day in the not-so-distant future when unmanned aerial vehicles do the high-flying jousts. Whether those drones will get snazzy nicknames like Maverick and Ice Man, or play shirtless beach volleyball in their downtime remains to be seen [sources: Majumdar, Russia Today].

If you remember the iconic 1986 movie well, you may recall that Tom Cruise and those guys played naval aviators: jet pilots training for dogfights against some unknown enemy in which the winner is the guy who shoots down the most planes. These days, the Navy is developing a drone to do that kind of fighting. The unmanned, carrier-launched airborne surveillance and strike drone will be about the size of the F-14 Tomcats that once did much of Uncle Sam's manned-combat flying missions; it just won't have a pilot onboard. It appears that the drones' initial mission will be to carry fuel into or near battle areas so that manned fighter jets can refill without having to land. But military brass is keeping the door open for other types of drone-based activities. In April 2015, Navy Secretary Ray Mabus said he expects drones to one day replace the naval fighter jets currently in action [sources: Majumdar, Russia Today].

Not everyone is hopping on board the wave of shifting technology toward completely drone-based aerial warfare. These folks tend to say that drones are more likely to make manned-plane fighter jets more effective and efficient, rather than unnecessary. Critics question the speed and endurance capacities of UAVs, and point out that they've yet to be developed with the stealth capacities that help some traditional fighter jets avoid attention in hostile areas. They also question whether drones can be made smart enough to adapt to rapidly changing circumstances in a live war zone, rather than the relatively sterile and plodding circumstances of the surveillance and bombing missions that the machines currently run [source: Malandrino].

Rather than looking to drones to lead fighting missions, skeptics say military types should alter the target and consider ways to use drones as wingmen, armed with missiles and capable of taking real time directions from a human pilot up there in the sky with them [source: Malandrino].

10 Insane Disguises That Actually Worked
Grumman EA-6B Prowler
How can you train honeybees to sniff for bombs?