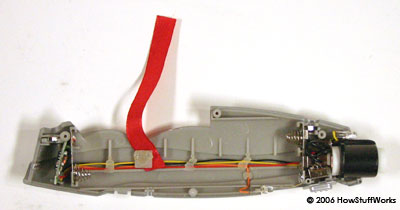 The heart of a Cold Heat tool is a broken circuit that travels from a few AA batteries to a tip that has two halves. The tip can look like one solid piece, but a dark insulating material keeps the two halves electrically isolated from one another.

A Cold Heat tip. The dark strip down the center is an insulator. Note that one half of the tip has broken.

When you turn the Cold Heat tool on, the switch closes a circuit that also includes a small light. This light lets you know that the tool is on. But a parallel circuit -- the one leading to the tip -- is still broken. This circuit remains broken until you put something conductive, like solder, in contact with both halves of the tip. The solder completes the circuit, also allowing current to pass through a second light.

Because of electrical resistance, both the solder and the tip heat up very quickly, and the solder melts. Dry skin doesn't conduct enough electricity to effectively complete the circuit, so the tip stays cool when you touch it.

We'll look at the circuitry and the tip in more detail in the next two sections.

Most solders are alloys of tin and lead. Since lead carries certain health risks, lots of companies and organizations have researched and developed lead-free solders. The National Institute for Standards and Technology has compiled a database of lead-free solder properties here.