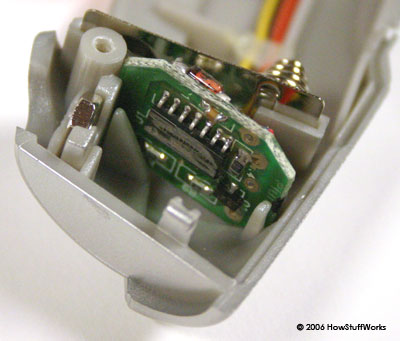 The Cold Heat tool has a small circuit board next to the battery contacts.

We've established that the Cold Heat tool has pretty simple circuitry. The circuit that includes the power switch also includes a small light. A parallel circuit stays broken until both halves of the tip come into contact with a conductive material. A small light on this circuit lights up when it's complete, also.

The Cold Heat tool also has some electronic components beyond basic wiring. A small circuit board is at the end opposite the tip. This circuit board has two diodes, several resistors and a 14-pin integrated circuit. When both halves of the tip come into contact with solder, the chip routes power from the batteries through that branch of the circuit.

The flip side of the circuit board

So, when you turn the Cold Heat tool on, current flows from the negative pole of the batteries through a wire that leads to a small light. From there, it flows to the circuit board and then to the positive battery terminal. As long as solder isn't in contact with both halves of the tool's tip, that's the end of the process. Once you apply solder, the chip routes lots of power through the portion of the circuit that includes the tip. The electricity moves:

Metal contacts connect the wiring to the halves of the tip.

The tip is as important to the tool's abilities as the circuitry. We'll examine the tip, including what it's made of, next.