In the U.S. Navy, unconventional warfare is often the purview of the SEALs, the Sea, Air and Land troops who go through an incredibly intensive training program, including Hell Week. After this specialized training, SEALs are capable of using guerilla warfare in battle, including infiltrating into the enemy's camp, destroying enemy supplies and creating diversions. In addition, they build relationships with foreign nationals, move against enemy targets through ambushes and rescuing hostages, serve in counterterrorism squads, and engage in special reconnaissance, spying, gathering information and doing the preliminary work to prepare for an invasion of armed forces.

Aside from training in teamwork, SEALs spend more than 30 months learning how to dive and drive, engaging in combat swimming, training with explosives, and parachuting and swimming with their hands and feet bound. Of course, before you even get into the SEAL program, you have to be in good enough shape to swim 500 yards (457.2 meters) in 12.5 minutes or less; take a 10-minute break; do 42 push-ups in less than two minutes; take a two-minute rest; do 50 sit-ups in less than two minutes; rest for two minutes; do six pull-ups;, then run a mile and a half (2.4 km) in less than 11.5 minutes. Still interested? Join the Navy first, and you may be on your way to participating in unconventional warfare. 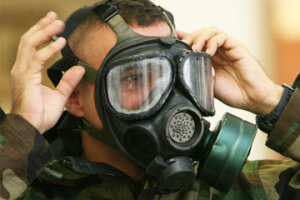 How Biological and Chemical Warfare Work