by Robert Lamb Oct 31, 2018
This Gundam was on permanent display in Tokyo. It measured nearly 60 feet (18 meters) high. It was replaced by its buddy, Unicorn Gundam, in late 2017. Chris McGrath/Getty Images

If science fiction has taught us anything, it's that giant, piloted robotic humanoids are essential to the protection of everything we hold dear.

Invading Kaiju from another direction? Send in the Jaegers. Robeasts from Planet Doom? Better assemble Voltron. As James Cameron's "Aliens" taught us in 1986, even a noncombat mech suit can make all the difference against an extraterrestrial threat.

RX-78-2 Gundam remains one of the most influential examples, however. The titular piloted giant robot entered the world in 1979 as part of Yoshiyuki Tomino's "Mobile Suit Gundam" franchise, which remains popular today.

But could we build our own Gundams?

The simple answer is yes. In fact, scientists have been tackling various aspects of the technology since at least the late 19th and early 20th centuries. During that time, both Russian and American inventors explored the possibility of mechanically enhanced exoskeletons to aid humans in various physical movements. Since that time, we've continued to see exoskeleton advancements aimed at injury rehabilitation, space travel, industrial labor and even military combat.

Power armor is nice and all, but it's hardly a giant robot that stomps around and punches monsters in the face. What about true, towering mechas?

Well, the answer here is also a yes. Within the field of robotics, we've seen tremendous achievements in the creation of remote-control, autonomous and semi-autonomous machines. Today, military drones haunt the skies over various global combat zones and space exploration probes have delivered wheeled rovers to other worlds. We've even given our wheeled robots arms for bomb disposal, Martian soil sampling and deep-sea exploration.

But none of these mechanical minions boasts legs. Even the humanoid Robonaut, developed by NASA's Lyndon B. Johnson Space Center, didn't acquire climbing legs until its second iteration. For proper Gundams to one day walk the planet, we'll need proper robot legs — and this too has featured into the work of various robotics programs. The most famous of these is Boston Dynamics' military-funded walker programs, such as BigDog and Cheetah — and not just because they inspired the killer robots in the "Black Mirror" episode "Metalhead."

Because while aerial and nautical robots can get by just fine without a leg to stand on, terrestrial robots are a different matter. Wheels are great on the road and unobstructed landscapes, but legs provide the most versatility for diverse environments. True wheel-like structures only rarely occur in biology — such as the bacterial flagellum, a structure found in such species as the bacterium E. coli. Legs, on the other hand, are natural selection's primary solution to terrestrial transportation. So it makes sense to copy evolution in this regard, and biomimetic engineers have looked to all manner of leg arrangements for inspiration, from humans to millipedes.

But here's the catch: Legged movement requires a great deal of programming complexity and power. It may feel easy for most of us, but our minds and bodies are highly evolved for the task. Even a fully piloted Gundam — say, one where its movements are mapped on those of the pilot — would require a tremendous amount of biomimetic engineering. And semi-autonomous units would require the dexterity and spatial awareness to avoid the pitfalls of the ED-209 in "Robocop," which stomped around on two feet but was incapable of navigating stairs.

But the mecha dream is strong. While various robotics companies continue to develop the necessary technology, sci-fi fans also go at it alone. Functional mecha suits have strolled the Playa at Burning Man and paraded at various conventions. Most impressive of all, Japanese engineer Masaaki Nagumo built a working, life-size model of a Gundam in 2018. The mecha, dubbed LW-Mononofu, stands 28 feet (8.5 meters) tall and weighs 7.7 tons (7 metric tons). It's too big to leave the factory space it calls home, but Nagumo rents it and other mechas out for roughly $930 an hour. It's not protecting the world from alien attacks, but it's quite a hit for kids' birthday parties.

And if aliens or giant monsters DO attack, well, mechas might not be the best option anyway. As Joe Pappalardo pointed out on Popular Mechanics, the Jaegers from the "Pacific Rim" films are entirely outclassed by existing aerial bombers and attack helicopters.

Now That's a Good Idea
HowStuffWorks would like to thank Lucas, 12, from Ontario, Canada, for sending us this question to research. Lucas, we hope that answer was satisfactory, nay, exemplary. Readers, if you have a question you'd like us to answer, send it to us. We'd love to hear from you. You can reach us by submitting our contact form. 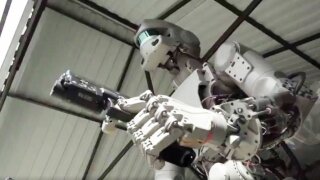 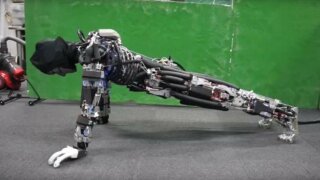 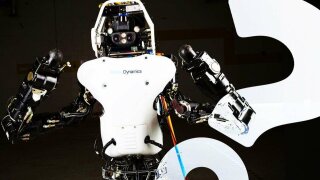 A Small Shove for a Robot, a Giant Leap for Robotkind