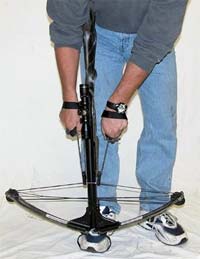 Most modern crossbows have the same basic loading and cocking procedure:

Crossbows have an automatic safety that engages as soon as you cock the bow. Some have a separate manual safety that you can engage yourself. Either way, the safety will keep you from firing the bow accidentally.

In addition, you should never dry fire your crossbow or use it with bolts that are lighter than those it's built to use. A crossbow is made to move very quickly while pushing a bolt, and if that bolt isn't there, the extra energy could break the crossbows' limbs. Dry firing voids nearly all crossbow manufacturers' warranties.

Finally, laws governing crossbow use vary widely, and they specify who can use a crossbow and when. Some laws permit only hunters with disabilities to use crossbows, while others permit anyone to use a crossbow during any hunting season. Before using a crossbow, particularly for hunting purposes, research the laws in your area.

Check out the links below for more information on crossbows, physics and other topics.

The size and strength of a crossbow corresponds to the size and weight of the bolts it fires. Using a light bolt with a very strong crossbow can cause the bolt to fly erratically and can damage the bow.

Similarly, archers must choose the right arrows when using traditional bows. Arrows bend as they move, and arrows that are too long or too flexible can hit the front of the bow rather than flying past it.