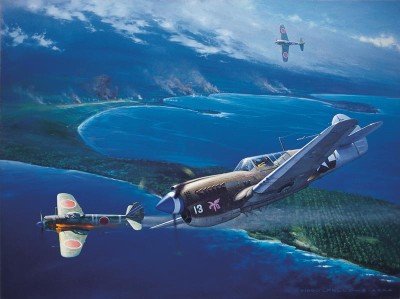 The Curtiss P-40 Warhawk was a plane that refused to die. After 1943 it was superseded by more advanced fighters, yet it remained in production until the end of 1944. See more flight pictures.
g

The Curtiss P-40 Warhawk is one of the best-liked airplanes of World War II, even though its performance was never quite up to that of its opponents. The most important thing about the P-40 to the United States was that it was available in ever-growing quantity to fight a war when no other fighters were.

The Curtiss P-40 Warhawk was derived from the Curtiss P-36 that the veteran designer, Don Berlin, had conceived in 1934 as the means by which Curtiss Corporation would regain its position as the premier manufacturer of fighter aircraft in the United States. The P-36 got off to a rocky start, being bested in competition by the Seversky P-35, but it was ordered in quantity by the Air Corps and by foreign ­buyers.

The Curtiss P-40 Warhawk was tough and virtually trouble-free. It was the most important American fighter plane of 1942-1943. It saw continual improvements to arms and armor. Engines, too, were regularly uprated.
n

When the Allison V-1710 liquid-cooled V-12 engine became available, Don Berlin modified the tenth P-36A to accept it, and the XP-40 was born. It received the largest order yet placed for an American fighter: 524 P-40s at a total price of $13 million. The P-40 went through 19 different model designations, and stayed in production through 1944. A total of 16,802 was built.

The Curtiss P-40 Warhawk achieved its greatest fame while flying with Claire Chennault's American Volunteer Group (AVG) in China, the Flying Tigers. Under Chennault's stern tutelage, the AVG used dive and zoom tactics to defeat the Japanese, who were flying Nakajima Oscars for the most part.

The first Curtiss P-40 Warhawk was a P-36 running with a supercharged Allison engine. The blend was successful, and a great plane was born.
m

The Curtiss P-40 Warhawk performed well in the Pacific, Alaska, Africa, and Russia. Its strong construction, heavy firepower, and ability to dive enabled it to compete with enemy fighters. It was a formidable ground-attack aircraft, as well.

Don Berlin had indeed revived his company's fortunes with the Curtiss P-40 Warhawk, but the firm seemed jinxed: The Warhawk was the last Curtiss fighter to reach production status, an ironic end for what had been a great company.