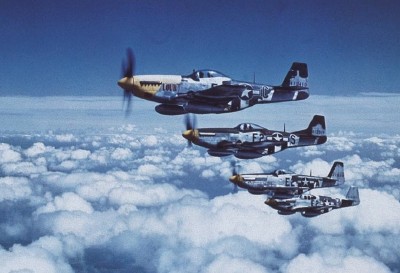 The drop-tank innovation gave the North American P-51 Mustang long-range capability. This made it ideal for bomber escort, which allowed a maximum number of bombs to hit targets, and bring the war to a conclusion. See more flight pictures.
j

The North American P-51 Mustang was involved in one of the unusual twists of World War II. The versatile German Junkers Ju 88 bomber was created by a design team led by W.H. Evers and Alfred Gassner, both of whom had worked for American aviation firms, while the design team of the premier American fighter, the North American P-51 Mustang, was led by Edgar Schmued, who had formerly worked for Messerschmitt and Fokker.

Originally purchased by the British as a P-40 substitute, the Mustang first fulfilled its true potential when it was the subject of another international switch, the installation of the Rolls-Royce Merlin engine. Ignored at first by the USAAF, the Mustang was soon being purchased in quantity, for it had the speed, maneuverability, and most of all, the long range necessary for vital escort duties.

It is not an exaggeration to say that the introduction of the Mustang spelled doom for the Luftwaffe, for it was not only able to escort bombers on long-range missions, then engage in dogfights, it was also able to drop down on the deck and destroy the German Air Force on the ground.

When its drop tanks (108-gallon tank shown) were full of fuel, the North American P-51 Mustang had its hands full with the German Fw 190 and Bf 109. Once those tanks were emptied and discarded, though, the Mustang was clearly superior to both of those Luftwaffe fighters.
n

The Mustang was not without flaws: It was difficult to take off when fully loaded, and only marginally stable until the rear fuselage fuel tank had been emptied. Nonetheless, it was able to defeat every Axis fighter it encountered, and went on to serve with distinction as a ground-attack fighter in the Korean War.

Today, more than 100 Mustangs are flying, most of them lovingly restored. They are piloted with pride at fly-ins, and a few earn their keep as unlimited racing planes at the Reno Air Races. Like the B-17 Flying Fortress, the Mustang won the affection of the public early and has never lost it.