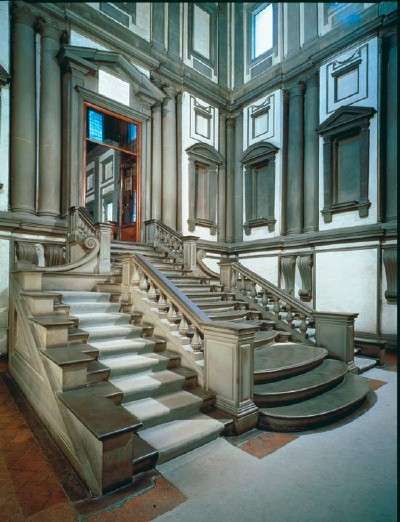 Laurentian Library vestibule and stairs by Michelangelo (c. 1524-34). The library is located on top of an existing monastery building in San Lorenzo, Florence.

Michelangelo worked on the Laurentian Library at the same time he was working on the Medici Chapel. Constructed as a third story atop existing monastery buildings, the library was built in stages until Michelangelo's departure for Rome in 1534. Years later, Michelangelo sent a drawing for the magnificent staircase, but he never saw the structure in its current state of completion.

Giulio de' Medici, who had by this time become Pope Clement VII, commissioned the creation of a great library to house the vast Medici collection of books. The design, particularly that of the library's vestibule, is one of Michelangelo's greatest architectural achievements. Its main feature is the spectacular staircase, the idea for which came to Michelangelo in a dream, whose three flights of steps seem almost alive as they cascade downward to fill the vestibule space.

The reading room of the Laurentian Library.

Preceded by the dynamic energy of the vestibule, the orderly space of the reading room conveys a sense of quiet concentration. The pilasters, ceiling beams, and floor pattern converge to effectively "trap" the rhythmic replication of bays that run the length of the room.

Michelangelo even designed the furniture of the library's reading room so that it would form a seamless part of the room's overall design.

During the construction of the Laurentian Library, the Medicis came into conflict with Rome. Michelangelo had helped fortify Rome and thus found himself no longer in favor with the Medici family. Go to the next page to see a drawing Michelangelo did for a fortification.