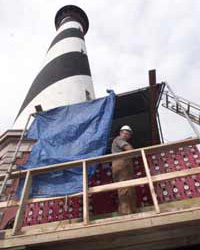 Atlas didn't have a hydraulic jacking system, like these movers of the Cape Hatteras Lighthouse.
John Althouse/AFP/Getty Images

According to Greek mythology, Atlas sided with the Titans in a war against the Greek god Zeus, and as punishment was doomed to hold the entire heavens aloft forever. He's often depicted in art as holding the world on his back. Atlas, it seems, knows a little bit about heavy burdens.

What would he say about structural moving -- the process of lifting an entire building at the foundation and moving it elsewhere? Well, he'd probably say that these movers are doing it the easy way, with the help of machines and technology. All the same, even Atlas would probably be impressed by the weight of some of the buildings on this list.

Structural moving is an increasingly common way to preserve historic buildings that might otherwise be razed to make way for development. It's also a way to place a building in a safer location if it's threatened by flooding.

While almost anything can be moved structurally, from old churches to nuclear reactors, the buildings on this list set themselves apart by their weight and, sometimes, by the difficulty of the move. Everything about these moves is big: the number of engineering hours, the budget and the equipment. It's enough to give even Atlas a headache -- after all, he never had to carry the world through a crowded downtown corridor. Read on to find out about one oversized building that traveled right through the heart of Minneapolis.