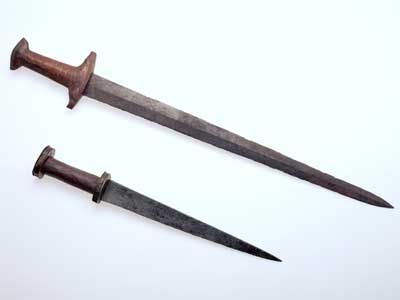 These daggers are an example of the kind of superior weaponry that Iron Age civilizations were able to craft.
English School/The Bridgeman Art Gallery/­Getty Images

­If you were to follow humanity's genetic trail back through the millennia, you'd find primitive creatures fumbling for a foothold on a primeval Earth. Lacking the natural, physical advantages of other animals, it's a marvel humans were able to claw their way out of the Cenozoic era at all. Of course, Homo sapiens had one advantage over all the other animals: the ability to make and use tools. While they lacked a lion's teeth and claws or a deer's defensive antlers, they learned to craft their own weapons from the world around them.

The oldest known tools date back 2.6 million years, to a time when humans used shaped stone to carry out a variety of tasks [source: Encyclopaedia Britannica]. After all, a sharpened rock can potentially slice, stab, scrape, pound and bludgeon. In time, humans began to specialize their tools, creating everything from arrowheads to pestles for grinding grain. Yet stone is a brittle, inflexible medium. Eventually, they were able to pinpoint more durable and malleable elements and their alloys: first copper, then bronze and iron. Instead of flaking or fracturing under blunt force, they proved malleable.

If you had to name the technologies that had the greatest effect on modern society, the refining of the heavy metal element iron would have to be near the top. Iron makes up a huge array of modern products. especially carbon-rich, commercial iron, which we call steel. Cars, tractors, bridges, trains (and their rails), tools, skyscrapers, guns and ships all depend on iron and steel to make them strong. Iron is so important that primitive societies are measured by the point at which they learn how to refine it. This is where the "Iron Age" classification comes from.

­Have you ever wondered how people refine iron and steel? You've probably heard ­of iron ore, but how do we turn a slab of rock into a set of stainless steel surgical instruments or a locomotive? In this article, you'll learn all about iron and steel. 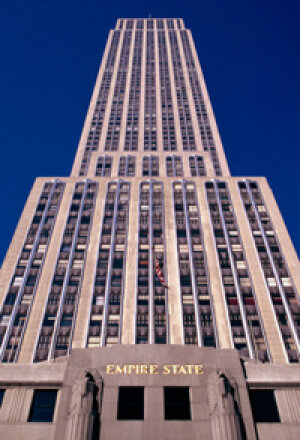