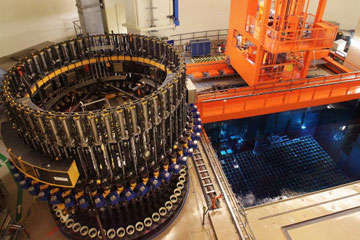 Nuclear reactors have one job: to split atoms in a controlled reaction and use the released energy to generate electrical power. Over the years, reactors have been viewed as both a miracle and a menace.

When the first U.S. commercial reactor went on line in Shippingport, Pa., in 1956, the technology was hailed as the energy source of the future, one that some believed eventually would make electricity too cheap to meter. Countries around the world built 442 nuclear reactors, and about a quarter of those reactors were built in the United States [source: Euronuclear.org]. The world has come to depend upon nuclear reactors for 14 percent of its electricity [source: Nuclear Energy Institute]. In fact, futurists fantasized about having nuclear-powered automobiles [source: Ford].

Then, 23 years later, when Unit 2 at the Three Mile Island power plant in Pennsylvania suffered a cooling malfunction and a partial meltdown of its radioactive fuel, feelings about reactors changed radically. Even though the stricken reactor's containment held and there was no major radiation release, many people began to see reactors as overly complicated and vulnerable to human and equipment failures, with potentially catastrophic consequences. They also worried about the radioactive waste from reactors. Worse yet, many wondered if government regulators and the nuclear power industry were leveling with the public. As a result, the construction of new nuclear plants stopped in the United States. When a more serious accident occurred at the Soviet Union's Chernobyl nuclear plant in 1986, nuclear power seemed doomed to obsolescence [source: Union of Concerned Scientists].

But in the early 2000s, nuclear reactors began making a comeback, thanks to rising energy demand, diminishing fossil fuel supplies, and the growing concern about climate change due to carbon dioxide emissions. Late in the decade, the U.S. Nuclear Regulatory Commission began to approve permits for new plants, and President Barack Obama included nuclear power as a key part of his energy plan.

But then, in March 2011, yet another crisis hit -- this time at the earthquake-stricken Fukushima Daiichi nuclear power plant in Japan -- raising worries again.

In this article, we'll explain how nuclear reactors work, what happens when they malfunction, and the risks they pose to our health and the environment compared to other energy sources. We'll also take a look at what technological advances could make the nuclear reactors of the future safer.

But first, let's look at how nuclear fission, the process that actually produces the energy, actually works.