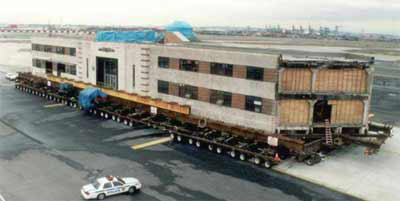 Usually airports serve as a way to move people around. But in 2000 and 2001, an airport terminal in Newark became the object that was moved -- and at a cost of $6 million, it was one expensive ride.

Building 51 at Newark International Airport in New Jersey was one of the United States' first passenger terminals. Aviation luminaries such as Amelia Earhart and Charles Lindbergh traveled through it, and it was the nation's busiest airport until LaGuardia opened four years later in 1939 [source: Collins]. However, as airports modernized and grew to accommodate more passengers, Building 51 became office space and eventually faced extinction so that a runway could be expanded.

The Port Authority and the New Jersey State Historic Preservation Office decided that the building was worth saving. It took five months to move the whole building, which had to be cut into three separate pieces. The two side parts each weighed about 1,200 tons, while the central portion came in at 5,000 tons. To move the main part three-quarters of a mile, 176 dollies moved at a speed of 100 feet (30.48 meters) an hour [source: Port Authority]. Now Building 51 is the public entrance for the airport's administration offices.