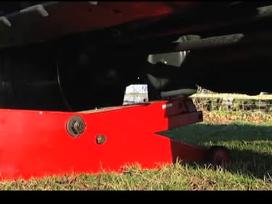 If you're still with us despite that pun -- and curious about how hydraulic jacks work and what else they're used for -- you can learn more in these videos.
Discovery

The next time the Detroit Lions have the home-field advantage, take a closer look at the team's playing field: If not for a record-breaking building move, you'd be staring at a historic theater instead of blue jerseys and green turf.

In 1999, International Chimney Corp. undertook a massive relocation when it toted the 2,700-ton Gem Theater to its present location four blocks from the Detroit Lion's Ford Field [source: Grandoni]. The downtown trek was complicated by the fact that the Gem Theater was permanently attached to another building, the Century Club. And, unlike the Gem Theater, which had been recently restored, the multi-story Century Club was missing much of its internal fortification. It had undergone haphazard renovations that had removed most of its interior framing and left it unstable; to secure it for the move, International Chimney crews outfitted the Century Club with steel framing. They then installed steel beams under the Gem Theater and Century Club, lifted both structures at the same time, and placed them on 71 dollies that were each about the size of a Ford Focus.

During the 1,850-foot (563-meter) move through Detroit's city streets, the crews had to navigate the buildings around a corner but kept them level by using a series of hydraulic systems. These systems were set up in three zones that could be raised or lowered to keep the buildings level [source: International Chimney Corp]. Although it was an ambitious project, the Gem Theater and Century Club relocation was a successful one, and it earned a Guinness World Record as the heaviest building ever moved on wheels.

Next up, learn how an English town returned the favor of one lighthouse's 170 years of life-saving service.