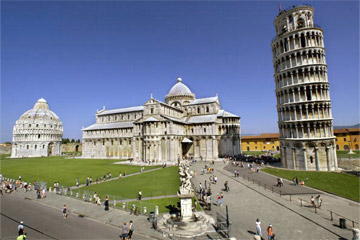 The tower of Pisa has been leaning so long -- nearly 840 years -- that it's natural to assume it will defy gravity forever. But the famous structure has been in danger of collapsing almost since its first brick was laid.

It began leaning shortly after construction began in 1173. Builders had only reached the third of the tower's planned eight stories when its foundation began to settle unevenly on soft soil composed of mud, sand and clay. As a result, the structure listed slightly to the north. Laborers tried to compensate by making the columns and arches of the third story on the sinking northern side slightly taller. They then proceeded to the fourth story, only to find themselves out of work when political unrest halted construction.

The tower sat unfinished for nearly 100 years, but it wasn't done moving. Soil under the foundation continued to subside unevenly, and by the time work resumed in 1272, the tower tilted to the south -- the direction it still leans today. Engineers tried to make another adjustment, this time in the fifth story, only to have their work interrupted once again in 1278 with just seven stories completed.

Unfortunately, the building continued to settle, sometimes at an alarming rate. The rate of incline was sharpest during the early part of the 14th century, although this didn't dissuade town officials or the tower designers from moving forward with construction. Finally, between 1360 and 1370, workers finished the project, once again trying to correct the lean by angling the eighth story, with its bell chamber, northward.

By the time Galileo Galilei is said to have dropped a cannonball and a musket ball from the top of the tower in the late 16th century, it had moved about 3 degrees off vertical. Careful monitoring, however, didn't begin until 1911. These measurements revealed a startling reality: The top of the tower was moving at a rate of around 1.2 millimeters (0.05 inches) a year.

In 1935, engineers became worried that excess water under the foundation would weaken the landmark and accelerate its decline. To seal the base of the tower, workers drilled a network of angled holes into the foundation and then filled them with cement grouting mixture. They only made the problem worse. The tower began to lean even more precipitously. They also caused future preservation teams to be more cautious, although several engineers and masons studied the tower, proposed solutions and tried to stabilize the monument with various types of bracing and reinforcement.

None of these measures succeeded, and slowly, over the years, the structure reached an incline of 5.5 degrees. Then, in 1989, a similarly constructed bell tower in Pavia, northern Italy, collapsed suddenly.

Leaning on a New Plan for Pisa

Officials became so worried the tower of Pisa would suffer a fate similar to the collapsed tower in Pavia that they closed the monument to the public. A year later, they rallied together an international team to see if the tower could be brought back from the brink.

John Burland, a soil mechanics specialist from Imperial College London, was a key member of the team. He wondered if extracting soil from below the tower's northern foundation could pull the tower back toward vertical. To answer the question, he and other team members ran computer models and simulations to see if such a plan might work. After analyzing the data they decided that the solution was indeed feasible.

Armed with a plan, workers went to the site and wrapped steel bands around the first level to prevent the stone from fracturing. Next, they placed 750 metric tons (827 tons) of lead weights on the northern side of the tower. Then they poured a new concrete ring around the base of the tower, to which they connected a series of cables anchored far below the surface. Finally, using a drill 200 millimeters (7.9 inches) in diameter, they angled underneath the foundation. Each time they removed the drill, they took away a small portion of soil -- only 15 to 20 liters (4 to 5 gallons). As the soil was removed, the ground above it settled. This action, combined with the pressure applied by the cables, pulled the tower in the opposite direction of its lean. They repeated this in 41 different locations, over several years, constantly measuring their progress.

By 2001, the team had decreased the tower's lean by 44 centimeters (17 inches), enough to make officials confident that they could reopen the monument to the public. Even after the drilling had stopped, the tower continued to straighten until, in May 2008, sensors no longer detected any motion. By then, the tower had lost another 4 centimeters (2 inches) of its lean and seemed to be in no immediate peril.

The actions taken by Burland and his team could, theoretically, stabilize the structure permanently. The real threat now comes from the masonry itself, especially the material in the lower stories, where most of the forces caused by the centuries-long leaning have been directed. If any of this masonry crumbled, the tower could collapse. And even a minor earthquake in the region could have devastating consequences.

In spite of these potential problems, engineers expect the famous structure will remain stable for at least another 200 years. By then, another intervention may be required, but the technology available to make improvements could be far more advanced and preserve the tower for another 800 years.

The tower of Pisa may be the most famous leaning structure, but it's by no means unique. Pisa's soft soil has caused problems for other towers, including the nearby Campanile (or bell tower) of San Nicola and the Campanile of San Michele degli Scalzi. Then there are the Asinelli and Garisenda towers in Bologna, Italy, and The Three Pagodas near Dali, China. But it's the leaning tower of Suurhusen, Germany, that now holds the record as the tower with the biggest lean -- 5.19 degrees. The German tower received the dubious honor only because restoration work reduced the lean of Pisa's most recognized landmark.