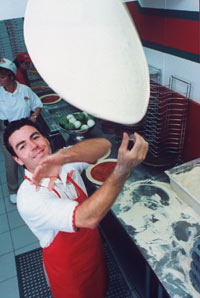 Pizza is one of the most popular foods on the planet. In fact, it's so popular that you would think it has been around forever. But actually, it's relatively new to the stomachs of the Americans who treasure it.

Despite its relatively short tenure in the United States, pizza has become a staple in the diets of many. In fact, it's so beloved that each person in North America puts away an average of 23 pounds of it each year [source: Domino's Pizza]. More than 3 billion pizzas a year are sold in the United States alone, resulting in about $37 billion in revenue, according to the National Association of Pizza Operators.

The beauty of pizza is that, no matter what your tastes, there are so many ways to make it and so many topping possibilities that virtually anyone can create a pizza to suit himself. Not too keen on cheese? Just sprinkle it on or leave it off entirely! Can't decide between macaroni and cheese and pizza? That's OK -- some places actually serve the two kid-friendly dishes combined!

In its simplest form, pizza consists of three main ingredients: bread, tomato sauce and cheese, but the options are almost limitless from there. In this article you'll learn more than you ever thought you could about pizza, including its history in Italy and the United States, how dough is made, and topping trends around the globe.

We'll also describe in mouthwatering detail the different types of pizza and what makes each of them special. ­And you might want to keep a phone handy -- in case you're tempted to order one while reading this.

Apparently, pizza tastes better when it's made by a guy named Ray. At least that's what New Yorkers seem to think -- more than 30 pizzerias use the name "Ray" in New York City alone. Here is a brief timeline of the Ray trend:­

The three Rays went after other people using the name, including Joe Bari, who had operated Ray Bari Pizza since 1973. It's now called RayBari Pizza.