What would it take to save every endangered species? 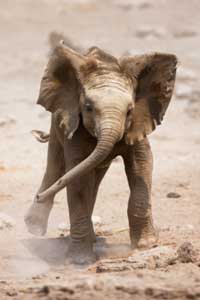 In the United States, it's estimated that more than 500 unique animal and plant species, subspecies and varieties have been driven to extinction since the Pilgrims parked their boat at Plymouth Rock. In biological hotspots like tropical rain forests, the modern toll is much, much worse [source: U.S. Fish and Wildlife Service].

Add to that the fact that the planet contains an untold number of species -- so untold that scientific estimates have outrageous ranges, from 10 and 50 million according to one source, and with fewer than 2 million species currently classified. With so many species unknown, the prospect of saving them all from extinction starts to sound like a herculean task. Plus, while some extinction is normal, the current rate is greatly accelerated making rescue efforts a whirlwind sprint against time.

So what would it take to save every endangered species? Well, it would almost certainly require more resources than we've got. Look at the California condor, for example. To reintroduce that species (whose population as of June 2010 was a grand total of 384 birds, some in the wild and some in captivity, up from around 20 in 1982), it has cost around $1 million a year [sources: San Diego Zoo, U.S. Fish and Wildlife Service].

When you consider the fact that in 2010, the ICUN Red List included 17,315 species in the vulnerable, endangered and critically endangered categories (up from 11,046 in 2000), it would cost an awful lot of money to address each species individually [source: IUCN Red List]. But that doesn't mean we should throw in the towel and not make any effort. By focusing on certain species, we can have a broader impact on decreasing extinction rates and helping the ecosystems around us continue to function. Because that's a good thing.

Flagship species are species that help draw attention to environmental issues. By working to save them, conservationists can also serve other distressed populations in a particular habitat. Take elephants, for example. Elephants are awesome, right? So someone looking to donate to a good cause can easily get excited about helping a herd of elephants. He or she can donate some money and help expand a wildlife reserve in Africa, which then means other endangered animals have more protected habitat as well.

But it goes beyond that, because elephants are also fundamentally part of the greater habitat and fulfill many important roles that help promote biodiversity. This makes them a keystone species in addition to a flagship species. They alter the landscape, knocking down trees and stomping on plants, which encourages new tree growth and improves conditions for grazing. They also distribute seeds throughout their territory, and in fact, as many as a third of the tree species in West Africa would be in big trouble if elephants didn't shuttle their seeds around, depositing them in different places.

So even though it's unlikely we have the resources to focus on saving every single species in danger of extinction, by channeling our efforts wisely, we do have a shot at slowing down the alarming extinction rates that have accompanied the rampant habitat loss, the over-exploitation of land, the spread of invasive species and the growing pollution problems that have plagued the planet's animal and plant populations during the past couple of centuries.

Are Bug Zappers Bad News?
Climate Change Could Destroy Doomsday Vault
What Are Single-use Plastics and Should They Be Banned?