In early January 2020, China joined the growing movement of more than 120 countries pledging to ban single-use plastics. The country of 1.4 billion citizens is the No. 1 producer of plastic waste in the world. It topped 60 million tons (54.4 million metric tons) in 2010 based on a September 2018 report titled "Plastic Pollution."

But China announced it plans to outlaw the production and sale of non-degradable bags by the end of 2020 in major cities (and everywhere by 2022), as well as single-use straws by late 2020. Markets selling produce will have until 2025 to follow suit.

The push to ban plastic took center stage in 2018 with massive promotions like the award-winning #StopSucking campaign, which featured stars like NFL quarterback Tom Brady and his wife Gisele Bündchen and Hollywood actor Adrian Grenier pledging to give up single-use plastic straws. Now countries and companies are saying no to plastics by the dozens, and consumers are following along with them.

As the plastics-ban movement hits major milestones — such as China's latest announcement — we decided to define the bottles, bags and straws that are causing this global stir.

What Is Single-use Plastic?

True to its name, a single-use plastic is disposable plastic that's designed to be used once then tossed or recycled. This includes everything from plastic water drink bottles and produce bags to disposable plastic razors and plastic ribbon — really any plastic item you use then immediately discard. While these items can be recyclable, Megean Weldon of the blog and waste-prevention shop Zero Waste Nerd says that's hardly the norm.

"In reality, very few plastic items can be processed into new materials and products," she says in an email. "Unlike glass and aluminum, plastic isn't processed into the same item it was when it was collected by a recycling center. The quality of plastic is downgraded, so eventually, and inevitably, that plastic will still end up in a landfill."

Take a plastic water bottle. Most bottles say they can be recycled — and based solely on their easily recyclable polyethylene terephthalate (PET) composition, they could be. But nearly seven out of 10 bottles end up in landfills or tossed as litter. This problem increased when China decided to stop accepting and recycling plastic in 2018. For municipalities, that meant recycling became significantly pricier, according to The Atlantic, so many municipalities are now simply opting for the budget-friendly landfill over recycling.

Pair this landfill-first approach with the world's ever-growing plastic consumption — humans produce almost 20,000 plastic bottles per second, according to The Guardian and America's waste grew by 4.5 percent from 2010 to 2015 — it's no wonder the world is overflowing with plastic waste.

Single-use plastics include a lot of things you might not consider, like cotton buds, razors and even prophylactics.
Sergi Escribano/Getty Images

Plastic Could Outlive Us All

Think banning all of this plastic is overkill? There are some very solid reasons why it makes sense. First, plastic in landfills just doesn't go away. According to Weldon, a plastic bag takes 10 to 20 years to degrade, while a plastic bottle takes almost 500 years. And, even when it's "gone," its remnants remain.

"Plastic never breaks down or goes away; it only breaks into smaller and smaller pieces until they're so microscopic they can be found in our air and our drinking water," Kathryn Kellogg, author and founder of the waste-reduction website Going Zero Waste, says via email.

Some grocery stores have switched to biodegradable plastic shopping bags as a way to meet consumers in the middle, but research shows this is hardly a savvy solution. One study from researchers at the University of Plymouth in England analyzed 80 single-use plastic grocery store bags made of biodegradable plastic over the course of three years. Their goal? Determine just how "biodegradable" these bags really were. Their findings were published in the journal Environmental Science & Technology.

Soil and seawater didn't lead to bag degradation. Instead, three of the four types of biodegradable bags were still sturdy enough to hold up to 5 pounds (2.2 kilograms) of groceries (as were the non-biodegradable bags). Those exposed to sun did break down — but that's not necessarily positive either. The small particles from degradation can quickly spread through the environment — think air, ocean or the belly of hungry animals who mistake plastic fragments for food.

Another reason many countries are prohibiting single-use plastics is because they shouldn't be reused, despite our best intentions. As many municipalities forego recycling, it's tempting to take matters into your own hands by reusing (and therefore "recycling") plastic bottles and containers. Sure, this may work for bags, but experts say to take caution when it comes to plastic bottles or food containers. One study in Environmental Health Perspectives showed that all plastics used in food containers and plastic bottles could release harmful chemicals if used repeatedly. (This includes those said to be free of bisphenol A [BPA] — a controversial chemical that's been linked to hormonal disruptions.)

While researchers are still analyzing the safety of repeated plastic reuse, experts recommend glass or metal to avoid potentially harmful chemicals. And according to Weldon, it's time we adopt a reuse mindset — be it cotton produce bags, stainless steel straws or a full-on zero-waste.

"The worst thing about any single-use item is that we devalue something to the point that we intend to throw it away," she says. "The convenience culture has normalized this destructive behavior and as result, we produce millions of tons of it every single year. If we change our mindset on what we consume, we will be more aware of the single-use plastic we use and how we can avoid it."

NOW THAT'S INTERESTING
If you think plastic bans are just for show, head to Kenya. This east African country is taking its ban so seriously that any Kenyan caught using plastic bags for trash or groceries can face four years of imprisonment and fines of up to $38,000, according to NPR.

Who Put the Baby in the King Cake?

6 Anti-inflammatory Foods You Should Be Eating 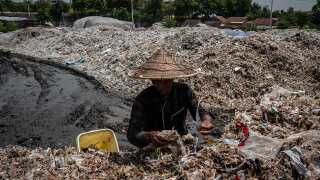 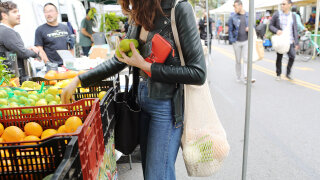 Reaching the Zen of Zero Waste 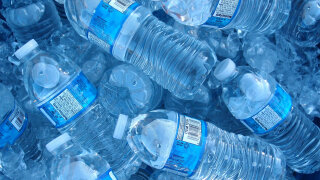 Plastic Pollution Is Showing Up in Our Poop