Can we harness energy from tornadoes and hurricanes? 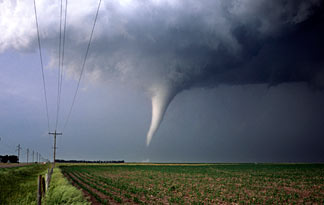 How much do you know about tornadoes?
DCI

Amid the deadly gusts of wind and chaotic storms signaling an impending tornado, you rush indoors to a safe, windowless place well within a building structure to escape harm's way. Watching the storm unfold, you wonder whether something positive could result from Mother Nature flexing her meteorological muscle: What if we could harness energy from tornadoes and hurricanes?

So far, experts haven't collected energy from these storms, but the idea has potential if we somehow develop cost-effective technology to do it.

Tornadoes and hurricanes produce massive amounts of energy. One scientist estimates that the average energy produced by a hurricane at any given moment measures in at 200 times the world's electrical generating capacity at the same moment. But not all energy is dissipated equally. Tornadoes and hurricanes are notoriously messy, with most energy dedicated to simply keeping the storm going.

Also, it depends on what you plan to use to collect the energy, said Chris Landsea, the science and operations officer at the U.S. National Hurricane Center. For hurricanes at least, the storms release the most energy and heat while condensing water vapor into droplets. At present, we don't have technology capable of capturing this type of heat energy. In addition, hurricanes play out the majority of their short life cycle at sea, where plenty of logistical problems stand in the way. The storms can come and go in as little as two days, Landsea said, and when they hit land, they lose much of their momentum and energy.

People also have considered placing windmills in a storm's path to harness wind energy. But there's a catch: Turbines would have to be strong enough to withstand the brutal forces of tornadoes and hurricanes while being mobile enough to securely station them in the storms' paths. Even now, companies brace their equipment for incoming storms by shutting off their wind turbines to prevent them from becoming damaged -- or even worse, transforming into large projectiles, according to one Scripps Howard News article.

In order to gather wind energy from storms, technology such as wind turbines would need to be both sturdy and mobile -- two qualities that are generally at odds.

The unpredictability of tornadoes and hurricanes keeps us from devising ways to harvest energy from them. Scientists are still working to answer basic questions about tornadoes and hurricanes, including how and why they suddenly appear. Even then, investors would need a guarantee that a given plan ensures the energy-harnessing technology stands a good chance of intersecting with the storms.

At this time, it's unfeasible to gather energy from naturally occurring tornadoes and hurricanes. But what about smaller, artificial ones?

We can't box up tornadoes and hurricanes. But can we recreate them and harness their energy at a smaller scale instead?

For tornadoes, it might be possible down the road. Tornadoes gather strength through forcefully tunneling warm, low-pressure air near the ground into high-energy thunderclouds. Most of this energy spirals through the storm's vortex, which erratically lumbers through the landscape. Rather than recreating a full-blown tornado, think of it as making conditions ripe for a vortex. You can even observe a vortex at home by watching water drain in a bathtub -- it's the same idea.

These storms have inspired engineers to want to create controlled vortices, the powerful spirals of energy at the heart of tornadoes (and bathtubs!). For example, the Atmospheric Vortex Engine, an idea thought up by a small engineering team, would consist of a 328-foot (100-meter) tall, chimneylike structure, where heat is introduced at its base. By adding steam, engineers may be able to encourage warm air to condense into water vapor that releases heat and energy. The goal is to form a vortex, which could be converted to energy by turbines placed near the top of the structure, according to the project's Web site.

But it's been difficult replicating tornadoes in such a controlled environment. Since energy cannot be created or destroyed, scientists would have to place an equal -- if not greater -- amount of energy into the system to yield results that would amount to usable electricity. Also, it's difficult to create realistic tornado conditions. Wind speeds in tornadoes can reach up to 300 mph (482 kph), according to the U.S. Federal Emergency Management Agency. Simulating real-life tornado conditions would require taller structures, too.

To harness energy from tornadoes and hurricanes, there's a lot of innovative work to be done, said Landsea. Until technology catches up to our imaginations, taming high-energy storms in nature will be the thing of the future.