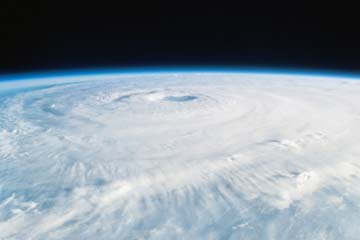 Are hurricanes getting more severe? Hurricane Isabel, a Category 5 storm that hit the East Coast in 2003, looked pretty intense when seen from orbit.
StockTrek/Digital Vision/Getty Images

There are three main schools of thought when it comes to whether hurricane intensity is on the rise. The first opinion is that the data is skewed. Hurricane counts were difficult to obtain before satellites began tracking storms in the 1970s, and that's not even getting into later incremental improvements in intensity assessments like more advanced computer tracking systems. Once you push back past the 20th century, the estimates grow even dodgier. Many of history's storms likely went completely unrecorded: If they made landfall in unpopulated areas, dissipated while still out at sea, or were only witnessed by ships whose crews may not have survived to tell the tale, they've been lost to the books.

The second school of thought is that hurricane frequency and intensity wax and wane in a yet-to-be explained cycle, and the current upsurge we're experiencing is simply part of this. Whether the cycle is purely natural, partially attributable to humans or due to some unknown combination of factors is still a matter of debate.

Thirdly, many scientists -- including all of those who served on the International Panel on Climate Change in 2007 -- think hurricanes are steadily increasing in intensity each season. They also think that global warming and other atmospheric anomalies are to some extent responsible for that rise. Perhaps the data is marginally off, perhaps natural cycles do contribute some, but by and large, these experts hypothesize that human-caused climate change is the main culprit for increasingly ferocious storms. That's because one of the three fundamental building blocks for hurricanes are warm ocean temperatures. And using data compiled mainly from 1970 on, many researchers have found correlations between rises in sea-surface temperature and surges in the number of powerfully intense hurricanes [sources: Emanuel, Bals].

One study researched data between 1970 and 2004, and found that while most hurricane patterns fluctuated during that span, the number of very intense storms increased dramatically [source: Webster].

Despite these tantalizing clues, it seems scientists have yet to come to a consensus on much of anything when it comes to hurricane severity. But if the data set is reliable enough, and the cyclical camp is wrong and this isn't just a fierce phase that will eventually pass, the threat of worsening storms coupled with rising sea levels might be enough to make anyone move a little further inland.

Meteotsunamis: How Winds Can Generate Catastrophic Waves
As Earth's Climate Changes, Is It Time to Redefine the Four Seasons?
'Fire Rainbows' and 'Sun Dogs': Weird Weather in the Smartphone Age