Why does smoke come from a fire? 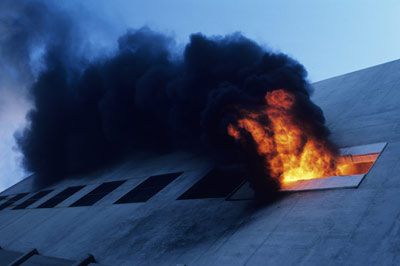 Charcoal is created by heating wood to high temperatures in the absence of oxygen.
Kim Steele/Getty Images

Let's say you have a nice fire going, and it has burned down to the point where what you see is a collection of hot "glowing embers." The fire is still producing a lot of heat, but it is producing no smoke at all. You might have gotten to this point either by starting with logs in a fireplace or by starting with charcoal. If you now toss a piece of wood, or even a sheet of paper, onto this fire, what you will notice is that the new fuel produces a lot of smoke as it heats up. Then, all of a sudden (often with a small pop), it bursts into flame and the smoke disappears.

If you have a fireplace or wood stove, or if you have been around a lot of campfires, this little scene is very familiar to you. It tells you a lot about smoke -- let's look at what is happening.

There are four things that you find in any piece of wood:

When you put the fresh piece of wood or paper on a hot fire, the smoke you see is those volatile hydrocarbons evaporating from the wood. They start vaporizing at a temperature of about 300 degrees F (149 degrees Celsius). If the temperature gets high enough, these compounds burst into flame. Once they start burning, there is no smoke because the hydrocarbons are turned into carbon dioxide and water (both invisible) when they burn.

This explains why you see no smoke from a charcoal fire (or a fire that has burned down to embers). Charcoal is created by heating wood to high temperatures in the absence of oxygen. That is, you take wood and put it in a sealed box of steel or clay and you heat it to about 1,000 degrees F (538 C). This process drives off all of the volatile organic compounds and leaves behind the carbon and the minerals (ash). When you light the charcoal, what is burning is the pure carbon. It combines with oxygen to produce carbon dioxide, and what is left at the end of the fire is the ash -- the minerals.

Coke from coal is the same thing. Coke is coal that has been heated in the absence of oxygen to drive off the organics. The smoke that this process produces is actually very valuable -- it contains coal tar, coal gas, alcohols, formaldehyde and ammonia, among other things. And all of these compounds can be distilled out of the smoke for use. You may have heard of methanol (a form of alcohol) referred to as "wood alcohol." It used to be produced by distilling out of wood smoke.