Are there any risks associated with the production of wind energy?

by Lance Looper
NEXT PAGE 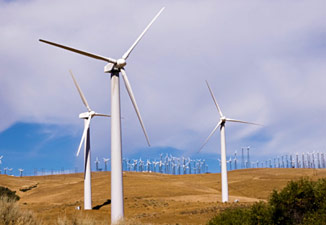 Wind farms are popping up all around the country. Curious about other potential sources of energy? Check out these lightning pictures!
iStockphoto/Thinkstock

The search for accessible, renewable energy has reached a fevered pitch, and one of the leading candidates to potentially replace fossil fuels is also one of the oldest -- wind. It's been harnessed for centuries to mill grains and power ships, and as far back as the 1930s it's been used to generate electricity. But over the past 40 years, as demand for and the price of energy has steadily increased, so too have the efforts to turn wind into a viable option for producing electricity on a large scale. The potential of wind turbines, which convert kinetic energy into electrical energy, has been promoted at every turn. But what about the risks? After all, these wind turbines can be colossal, measuring more than 400 feet (122 meters) tall, weighing in at close to 400 tons, and equipped with rotating blades that may span 300 feet (91 meters) or more. And even the most ambitious plans from the U.S Department of Energy aim to supply just 6 percent of the nation's electricity from wind by the year 2020. So, it is worth the risks?

First, let's look at some of the financial risks of wind energy. Subsidies and incentives offered by the government are creating a sense of urgency for utility providers and co-ops to install wind farms. But even with the financial breaks, wind energy is a cost-intensive operation. According to the American Wind Energy Association, constructing a 50 megawatt wind farm (around 25 wind turbines) carries an up-front cost of around $65 million, and that's before a single kilowatt of electricity is generated. That's a pretty steep price tag for a venture that rests completely on something as unpredictable as the wind.

Another risk associated with wind farming is blighting the landscape with acres upon acres of massive turbines. The same hypothetical 50 megawatt wind farm we just discussed, for example, would require nearly 4,000 acres (16 square kilometers), or around 150 acres (0.6 square kilometers) per turbine. So even in areas that are relatively isolated, these installations can turn an otherwise pristine desert mesa into an industrial eyesore. And because sweeping mountain ranges and breezy coastlines are ideal locations for both wind farms and tourists, communities including Nantucket Sound are resisting wind farm development out of fear that visitors will opt for other destinations.

In the next section, we'll explore some of the risks wind farming poses to the environment as well as to people.