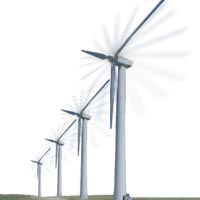 It's hard sometimes to imagine air as a fluid. It just seems so ... invisible. But air is a fluid like any other except that its particles are in gas form instead of liquid. And when air moves quickly, in the form of wind, those particles are moving quickly. Motion means kinetic energy, which can be captured, just like the energy in moving water can be captured by the turbine in a hydroelectric dam. In the case of a wind-electric turbine, the turbine blades are designed to capture the kinetic energy in wind. The rest is nearly identical to a hydroelectric setup: When the turbine blades capture wind energy and start moving, they spin a shaft that leads from the hub of the rotor to a generator. The generator turns that rotational energy into electricity. At its essence, generating electricity from the wind is all about transferring energy from one medium to another.

Wind power all starts with the sun. When the sun heats up a certain area of land, the air around that land mass absorbs some of that heat. At a certain temperature, that hotter air begins to rise very quickly because a given volume of hot air is lighter than an equal volume of cooler air. Faster-moving (hotter) air particles exert more pressure than slower-moving particles, so it takes fewer of them to maintain the normal air pressure at a given elevation (see How Hot Air Balloons Work to learn more about air temperature and pressure). When that lighter hot air suddenly rises, cooler air flows quickly in to fill the gap the hot air leaves behind. That air rushing in to fill the gap is wind.

If you place an object like a rotor blade in the path of that wind, the wind will push on it, transferring some of its own energy of motion to the blade. This is how a wind turbine captures energy from the wind. The same thing happens with a sail boat. When moving air pushes on the barrier of the sail, it causes the boat to move. The wind has transferred its own energy of motion to the sailboat.

In the next section we'll look at the different parts of a wind turbine.